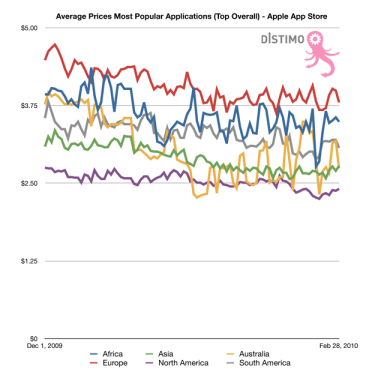 The latest monthly report from Dutch app analytics firm Distimo says that on average, prices of the most popular iPhone applications worldwide have decreased by 15 percent on average since December 1.

Distimo founder Vincent Hoogsteder explained in an email to me that turn-by-turn navigation applications from Tom Tom, Navigon, and others raised the average price in December, so that the current drop is more of a correction.

In addition, Hoogsteder said in, daily currency exchange rates affect worldwide prices. “Apple applies fixed price tiers when converting an app price to any currency other than U.S. dollars,” he said. Because Apple didn’t change its exchange rates during the measured period, it skewed the prices of apps, in this case making them lower.

Even accounting for those factors, I think there’s another: Now that the initial buzz of apps has worn off, and now that there are more than 100,000 apps in the store, price is much more of a differentiator than it was a year ago. Otherwise, app makers would be able to raise prices slowly over time as they figured out what people will pay for.

Software developers sometimes forget this, but a lot of the people carrying iPhones and buying apps are very price conscious. Apple made us all a little crazy for a bit, but now I think twice before downloading yet another $5 app. It seems much more likely that app makers will get their money by selling virtual goods or product upgrades to consumers who’ve downloaded lower-priced apps.