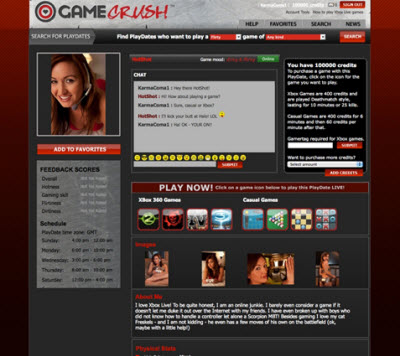 If you’re a lonely gamer dude, then GameCrush might  be your ticket to meet a hot girl.

That’s the basic pitch of this social networking service, where guys scan pay cash to play hardcore video games with attractive females on the GameCrush site.

You can try playing everything from online casual games to Modern Warfare 2 multiplayer combat, according to IGN. The site, which launched today, lets dudes view the profiles of “PlayDates.” The profiles say what the girls’ “turn ons” are and show their photos. If you find a girl you like, you can send her a game invite. If she accepts, you get six to ten minutes of one-on-one game time.

The PlayDates can block any of the annoying guys, who are known on the site as “Players.” The service supports the Xbox 360 and some casual games hosted on the GameCrush web site.

Support for the Wii, PlayStation 3, and World of Warcraft online game is coming later. You have to be 18 to create an account. Sign-ups are free, but you have to pay $8.25 to get 500 credits. One game session costs 400 credits, and you can leave a 100 credit tip at the end.

An Xbox Live game lasts about ten minutes, while a casual Flash game lasts six minutes. You can engage in video chat if you like. GameCrush says the cost is about the same as buying a girl a drink. But a hot girl who can beat you at a game of Halo is probably a close to an ideal date for a lot of gamer dudes. At least that’s my guess. Now excuse me while I go fix the videocam on my Xbox 360.