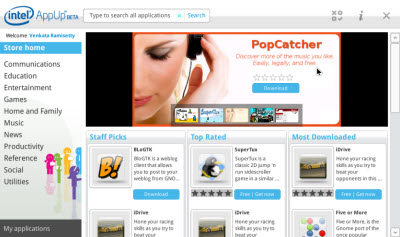 Encouraged by early results on Windows, Intel said today it will add a beta test version of popular Intel AppUp Center for Linux.

The Intel AppUp Center has a wide range of apps for netbooks, which often don’t have the horsepower to run most PC applications. These apps are tuned to run without a lot of bells and whistles. That’s why they can run on any netbook, adding very little cost.

To help the market take off, Intel introduced a Windows version of its app store at the Consumer Electronics Show in January. Now it will add an Intel AppUpCenter beta for Mobilin version 2.1.