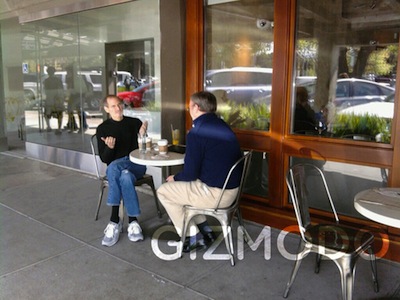 e relationship between Google and Apple has been cooling for a while now. Google chief executive Eric Schmidt left Apple’s board of directors last year because the two companies were becoming more and more competitive. And despite claims of mutual admiration, a long article published earlier this month in The New York Times highlighted how the rivalry has turned personal, with Apple chief executive Steve Jobs feeling betrayed by Google’s decision to enter the smartphone market.

But it looks like Schmidt and Jobs got together earlier today. A tipster sent photos of the pair meeting at a coffee shop in Palo Alto, Calif. to Gizmodo. There’s no tension evident in the images, but Gizmodo notes that they’re meeting at a neutral location, rather than at either company’s headquarters. The location is the Calafia Cafe & Market run by Charlie Ayers, who became famous for creating the gourmet menu for the cafeteria at Google while he was the company’s chef.

A crowd reportedly gathered around the pair, who then left to talk somewhere “more private.”

[image via Gizmodo, of course]