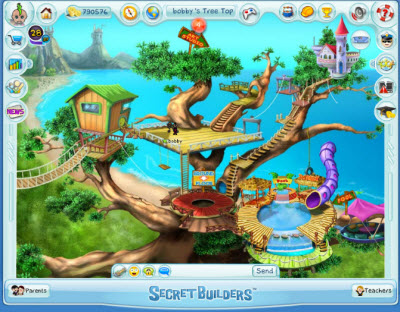 Secret Builders is announcing today that it has raised $2.3 million in funding for its online virtual world with educational games for children. In doing so, it has shown that it’s one of the survivors of what was once a very hot sector now littered with dead companies.

The San Mateo, Calif.-based company debuted its Secret Builders web site in December, 2008. It has slowly built up to 1 million registered users, and it now has 350,000 to 400,000 unique monthly visitors from 190 countries. That’s not huge in comparison to big sites such as Disney’s Club Penguin, which boasts millions of users, but on top of that, the company is now providing a white-label service, where it provides a kids virtual world that brands can license and run on their own.

Umair Khan, chief executive of Secret Builders, said in an interview that his company has patiently earned its users and hasn’t had to advertise heavily to get them as others have done. Khan said the traffic has grown through word-of-mouth, particularly among teachers. More than 800 schools are participating in the world because of its educational theme. Kids can go on a mission to find King Lear, who has been kidnapped by evil daughters, for example. And they can order slimy treats at the Weird Brew Cafe, run by the Weird sisters of Macbeth. (It’s a way of introducing Shakespeare’s characters to kids at an early age). The investors put money into Secret Builders because it had traction, Khan said. 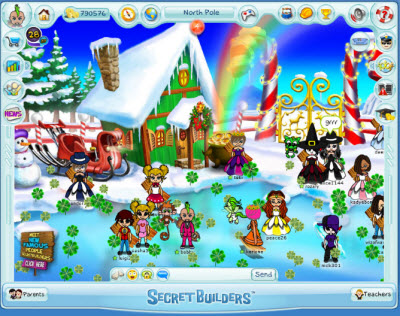 “We’ve weathered a tough time in the market,” Khan said. “Spending money to get users was a good way to go out of business. Now the investors are looking for traction and your long-term success in attracting users.”

The world is a free-to-play online service where kids can spend real money on things like pets, home decorations and other virtual goods. The average user plays 30 minutes per session and logs in about three times a week. Ages range from 5 to 14, though most players are 8 to 12.

This Adobe Flash-based world lets kids create two-dimensional avatars, or virtual characters, and play dozens of different mini-games spread throughout the different territories of the site. The games keep kids occupied, as do the missions that draw upon themes of creativity and cultural literacy.

Sponsors have been drawn to Secret Builders’ new white-label plan. It will open Virtual Lounge areas where sponsored events such as fashion shows take place on a regular basis. Instead of sinking millions of dollars into a virtual world, sponsors can simply adopt a world from Secret Builders.

Khan started the company in January, 2007, using employees in both San Mateo, Calif., and Bulgaria. The company now has 24 employees.

Khan was a math teacher before he went back to school at MIT, where he enjoyed associating with creative writers and literature majors. He became an entrepreneur, but after he got married and raised three kids, he decided to focus on ways to promote creativity for children. The idea is to make literature and other educational topics come alive through virtual worlds.

A lot of other virtual worlds have fallen by the wayside, such as Zookazoo, Metaplace, Google Lively and There.com. Some virtual world companies failed because they weren’t fun enough, offering the equivalent of chocolate-covered broccoli to kids. But there are still lots of rivals. Moonshoot recently started a virtual world for kids to learn English as a second language. Club Penguin, WebKinz, Poptropica, Free Realms, Fantage and Neopets are other rivals. Louise Curcio of M2 Research recently wrote a survey of a number of the kids virtual worlds where she noted video game companies were clashing with the toy makers.

To date, the company has raised more than $4 million. Investors include The Entrepreneurs Fund; Michael Tanne, CEO of Adforce; David Jeseke, former director of applications at Google; Sheila Marcelo, CEO of Care.com; Carl Page, co-founder of eGroups; John Welch, CEO of Making Fun; Sohaib Abbasi, CEO of Informatica; Scott Hassan, co-founder of eGroups and founding team member at Google; Carlos Cashman, founder and CEO of CourseAdvisors, and Ken Morse, a professor at the MIT Sloan School and co-founder of 3Com.