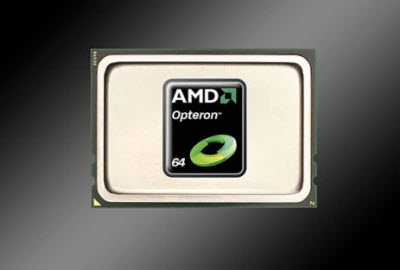 The chip core war continues to heat up. Today Advanced Micro Devices is announcing the release of new server microprocessors with 8 or 12 processors on a single chip.

The announcement comes less than two weeks after Intel introduced its first 6-core chips and a day before another major Intel server chip announcement. These announcements are timed so close together it’s like watching a pro tennis match.

But AMD argues that its new chips, based on its Magny-Cours code-named design, will beat Intel’s in processing performance and energy efficiency, as well as cost per computing power. The new chips have 119 percent better performance than AMD’s earlier generation of server chips and use the same amount of power.

The chips are officially named the AMD Opteron 6000 series (aimed at the high-end) and the 4000 series (aimed at low-end, energy efficient). The chips will be housed on AMD’s Maranello platform with AMD server chip sets, which are secondary traffic cops in a computer. These Operton chips will be used in high-volume servers, which have two or four chips each. The chips are twice as fast as AMD’s previous line of six-core processors introduced about a year ago.

Gina Longoria, director of product management in AMD’s server and workstation division, said in an interview that AMD’s Magny-Cours chips are designed to be easily integrated into a platform and make much more efficient use of a cheaper form of memory. While Intel tends to change a lot of platform elements with its new chip introductions, AMD tries to keep the platform housing the chips consistent, leading to lower overall costs.

AMD is also introducing its Direct Connect Architecture 2.0, which allows a microprocessor to communicate with four other microprocessors simultaneously, instead of the previous three. The DCA 2.0 supports as many as 16 cores together.

An estimated 25 server platforms will be introduced over time. Starting today, new models will be announced from Hewlett-Packard, Acer, Cray, SGI and Dell. Software support is available from Microsoft and VMware. These new chips mean that customers will be able to replace many aging servers with a single Magny-Cours server and get by with better performance, lower power, and lower maintenance costs.

The race will continue through next year. By then, the code-named Interlagos chips from AMD will be launched with 12 and 16 cores, while the low-end Valencia will debut with 6 and 8 cores.