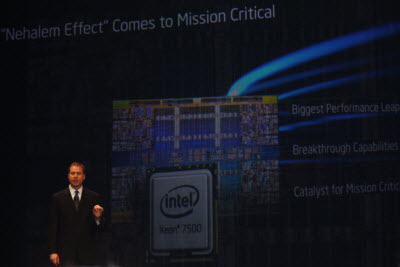 Intel took the server chip wars up a notch again today in its competition with Advanced Micro Devices. The world’s biggest chip maker launched its new Xeon 7500 series chip that can be used in everything from two-chip servers to supercomputers with thousands of processors.

The new chips come with four, six or eight cores — or computing brains — on a single chip. The Santa Clara, Calif.-based chip  maker announced the new chips in San Francisco at the same venue where Intel launched its six-core server chips a couple of weeks ago.

It’s turning out to be an especially busy spring in the server chip market. The announcement comes a couple of days after AMD announced its Magny-Cours server chips, which have eight or 12 cores a piece. Intel has also launched server chips a couple of times since January, based on its new 32-nanometer manufacturing technology, which produces cheaper and faster chips. Both chip makers want to keep the innovation level high as many corporations start to pull out of the recession and start buying computers again.

SGI said it would use the Xeon 7500 chips in a supercomputer with 64 sockets for chips with as many as eight cores, for a total of 512 cores in a single machine. Since each core can handle two threads (or process two pieces of code at once), the supercomputer can process 1,024 threads at once. Eventually, system makers will be able to put as many as 256 chips in a single system.

But the company also sees the new chip as bringing “mission critical computing,” which means supercomputers that keep stock markets running, to the mainstream server market. Intel said the 7500 series chips have performance that is triple that of its predecessor 7400 series chips, as measured by Intel on a number of benchmarks. A year ago, Intel launched its code-named Nehalem server chips and saw a record increase in processor shipments. 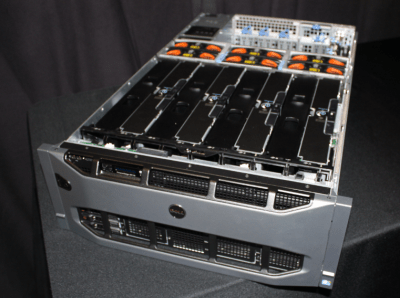 A data center can replace 20 single-core servers with a single new Intel Xeon 7500 processor system. Roughly 40 percent of all servers are using single-core processors. Gartner estimates that, because of the recession, there has been a delay in server replacements, with roughly a million servers needing to be replaced now.

Rob Enderle, analyst at the Enderle Group, noted that AMD has the lead in number of cores now with its 12-core Opteron chips. But he said that Intel has a solution for the broader server chip market.

“Both companies have the best solutions they’ve had in years,” he said. “But Intel has the broader market position.”

Customers who said they would use the new Intel processor include NYSE Euronext, which operates a number of stock exchanges where fast trading is an absolute must.

Today, server makers introducing new machines based on the Intel chips include Fujitsu, NEC, Cisco, Dell, Fujitsu, IBM, and Dell (machine pictured at right). On the supercomputer front, Intel vice president Kirk Skaugen said that the company’s chips are now in 402 of the top 500 supercomputers. It is thus making great progress in competition with IBM’s Power series of server chips.

Skaugen said that cloud computing — where  computing is done in data centers rather than on client machines alone — is expected to provide huge demand for servers in data centers in the coming years. Gartner predicts 50 billion devices will be connected to networks by the year 2020.

“Our goal is to put a supercomputer under everyone’s desk,” Skaugen said.