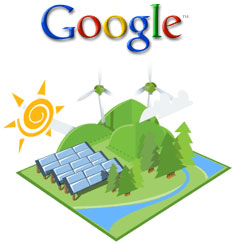 [Updated: So, as commenters have suggested, this is probably just an elaborate April Fool’s joke. TechCrunch has gone as far as to run a story asserting that Google has acquired a company with revolutionary new nuclear technology. When asked about the news, Google spokesman Jamie Yood said the whole thing is a joke and, beyond that, “this has nothing to do with our exploration of marshmallows as an alternative energy source.” So, oh well. It never hurts to speculate on what Google’s next big move in energy will be, so here you go.]

Google will be making a groundbreaking announcement in the alternative energy space, TechCrunch editor Michael Arrington told the audience at Tim O’Reilly’s Where 2.0 conference today. He says it will be the biggest story out of the search giant all year, but did not provide more detail. We have contacted the company, and are waiting to hear back on what this big news could possibly be.

That said, Google has expanded its presence in the green sector tremendously this past year. It started with the installation of solar panels at its headquarters in Mountain View, Calif., and investments in green companies via its philanthropic branch, Google.org. Then it launched Google PowerMeter, its home energy management platform, allowing homeowners to see how much energy they are using and how much it is costing them in real time. On the side, it also installed several of Bloom Energy’s zero-emission fuel cells on its main campus.

Then, suddenly, the company announced that it had applied to and then been approved by the Federal Energy Regulatory Commission to buy and sell energy just like a utility — although it denied at the time that it had any ambitions to compete with established energy vendors. It said that it simply wanted the option to buy energy wholesale, lowering costs and allowing it to integrate more renewable sources into its power mix. And finally, most recently, it said it is developing mirrors to make solar thermal power generation cheaper and more efficient.

The new announcement could fall into any of these areas. Although, based on how Arrington positioned it, it will probably be a bigger deal than an investment in another company or organization, or even a single piece of technology. Even PowerMeter didn’t make that big a splash when it popped up last spring. What could be big enough? If Google bucks its earlier claims and says it is in fact launching its own utility to compete with the likes of PG&E and others, that would certainly be game changing, especially if the utility put special emphasis on alternative energy.

Also meriting this kind of hype would be if Google finally decided to launch a dedicated unit of the company for designing and building its own solar panels, wind turbines, energy efficiency devices, etc. So far, its green efforts have been pursued by separate projects within the company. The launch of Google Green would establish it as a major player in the space and potential competitor to General Electric, Siemens and the like.

We’re waiting to hear back from several sources. We’ll update you as soon as we do.