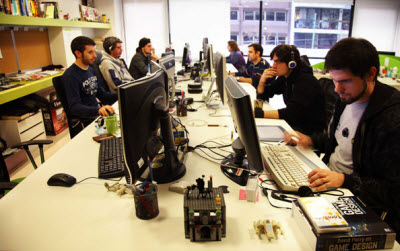 Playdom’s General Counsel Brad Serwin said in an interview that his company is bullish on social game talent in Argentina. He added, “There seems to be a style there (in game development) different from what is seen in the U.S., which adds a dimension to our game design and art.”

He cited Three Melons game Bola, a Facebook soccer application, saying that “this is a game designed for an international audience.” He explained that, “Americans (entrepreneurs) can be US-centric, but Argentines appear to be international” in terms of which markets their products appeal to, a big plus for Playdom and its’ global ambitions.

This is its second foray into South America just this month. On March 16, it announced a $5 million investment in Argentina’s Metro Games.

As part of today’s announcement, Three Melons CEO and co-founder Mariano Suarez Battan now becomes a Playdom Executive Producer. His main role will be to continue to run Three Melons in Buenos Aires, but when asked if he will play a role in Playdom business development in Latin America, Serwin said that, “we certainly hope so. He and his senior leadership are our Senior Representatives in Latin America for the foreseeable future.”

He did however caution that, “I would not look for additional deals in the region in the near future.”

I also reached Suarez Battan today and asked why he sold now instead of holding out and perhaps even launching an IPO from Buenos Aires. He said that, “the gaming industry is consolidating now and it is the big players that are growing very rapidly.” He maintains that this was his best option to keep up with the pace of the industry.

We have written about Three Melons before. It was one of the first companies selected for the Endeavor Mentor Capital Pilot program, launched in Montevideo, Uruguay last September. Endeavor is the New York-based non-profit that seeks to promote entrepreneurial networking in the developing world.

We have also written about how not just Argentina but the Southern Cone including Chile and Uruguay is rich with gaming companies. In Buenos Aires, other gaming companies include QV9, Sabarasa, Hungry Games, and Atommica. French company Game Loft also has development here. Suarez Battan estimates that 1500 people work in game development in Buenos Aires.

Three Melons is known for its Daiquiri technology, a game engine that makes 2D with flash appear three-dimensional. It was also an early adopter of Unity 3D technology. It has developed games for Lego, MTV, and Disney.

The company was founded in 2005 with $150,000 from friends, family and fools, according to Suarez Battan. In 2009, it received $300,000 from Argentina’s Banco Santander Rio’s Nexo Emprendedor program, a fund started to promote entrepreneurship here.

Suarez Battan credits the program for helping Three Melons transform from a service company to a product-based company.

While many in Silicon Valley only think of South America in terms of outsourcing, the few times they think of it all, Suarez Battan is part of a new generation of Argentine entrepreneurs who are increasingly product-focused and globally oriented.

This acquisition is likely to boost their spirits as well, according to Wences Casares, an Argentine gaming and entrepreneurial pioneer and now CEO and co-founder of Palo Alto-based Bling Nation.

Casares co-founded Wanako Games in Santiago, Chile in 2002. Vivendi acquired it in 2007.

He calls today’s deal “the first of a kind” for Argentina and says that Three Melons now becomes a bridge between other entrepreneurs here and Silicon Valley. He says that now, “a lot more young developers from Argentina are going to come to Silicon Valley, and a lot of knowledge transfer is going to take place, whether they like it or not.”

Casares also believes that Three Melons serves as another example of how young Argentine companies can bypass the traditional business-political dynamic in Argentina, which remains laden with cronyism and corruption. Twenty and thirty-somethings like Suarez-Battan are discovering they can skip the hassles of selling in Argentina and instead launch global companies from here.

Casares says that, “this is what these kids are figuring out today.”

Casares appears to have played a facilitating role in the Playdom-Three Melons relationship. Bling Nation board member Chamath Palihapitiya is also on Playdom’s board (in addition to his day-job as Facebook executive) and helped introduce Playdom CEO John Pleasants to Argentina, according to Casares.