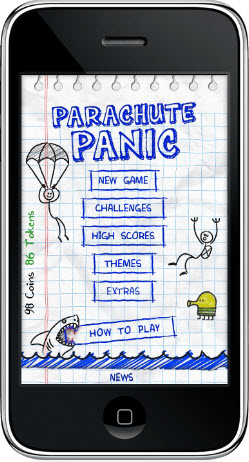 Scoreloop is announcing today that its social game platform can now more easily support new ways to monetize mobile games on the iPhone and Android phones.

The Munich, Germany-based company is adding support for downloadable content and in-game currencies to its social game platform, said Marc Gumpinger, chief executive of the company, in an interview. In the past, Scoreloop let game developers generate sales through purchases of virtual currency for challenge matches. With the new system, gamers won’t have to exit a game to make a purchase.

The system can be used to build revenue-producing features — such as the sales of weapons — in both existing and new mobile games. Two games taking advantage of the new Core Social software developer kit are Astro Ranch and the brand new Parachute Panic HD for the iPhone and iPad. (The latter game is being released April 3, with the launch of Apple’s iPad).

The new model lets developers take advantage of the freemium model, where developers and publishers give apps away for free and hope to make money through player purchases of virtual goods. Scoreloop’s platform, which competes with OpenFeint and Ngmoco’s Plus+, lets users connect with other players, increases how much a player engages with a game, and helps developers to monetize the additional usage through downloadable content.

Gumpinger said that his company differs from rivals in that it offers a white-label service, where the game makers can put their own brand on the social game features. And Scoreloop also does not compete with its customers by making its own games. Earlier versions of Parachute Panic have been downloaded over 4 million times. Scoreloop’s platform is the social game platform of choice on MySpace. The company has 25 employees.