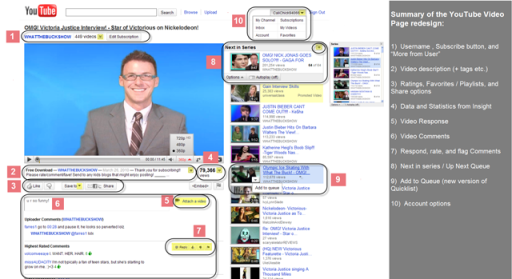 YouTube is in the process of rolling out a new look and feel. The Google-owned video sharing site will, according to a briefing given to Mashable writer Benn Parr, be less cluttered and more inviting toward longer video-watching sessions.

The company’s goal is to get you to watch more videos. The update is scheduled to be completed by 7 PM Pacific time tonight.

The most interesting part of Parr’s briefing was that YouTube officials told him, “at least 37% of YouTube’s users simply don’t want or use these features; if they could just have a webpage with a title, a giant video and a search box, they’d be ecstatic.”

With that in mind, YouTube designers have reduced the number of elements on each page, so your eyes can more comfortably rest on the video clips. The pages don’t look radically different, just less junky. It’s not so much a rethink as a cleanup, with lots of subtle changes adding up to a more watchable site. For example, the one-to-five-star ratings are being replaced with a simple up or down vote.

One new feature will probably annoy a vocal minority of users: YouTube has added windows that pop up when you hover your mouse over some parts of the page. The idea is to make it easier to get to video descriptions and statistics. But for many of us, the boxes will feel like unbidden intruders. Yahoo CEO Carol Bartz notably removed the hover effects from Yahoo’s front door as one of her first executive decisions.