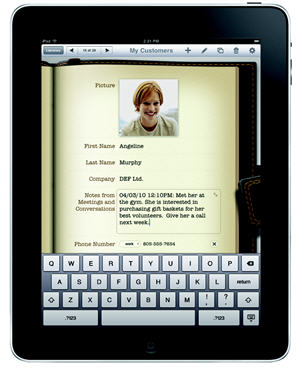 Filemaker, originally a PC application for creating personal databases, was one of the killer apps that made the Mac a hit in the 1980s. It’s not hard to figure out compared to, say, MySQL or Oracle, and it has a reputation for not crashing and destroying months of carefully entered data.

This afternoon, Filemaker’s Bento for iPad app appeared in Apple’s iTunes App Store. It’s a $4.99 program that lets one build custom databases — think inventory, personal contacts, hobbies, or any use for which you want something more simple than Excel, yet customizable and designed to be looked at on an iPad screen.