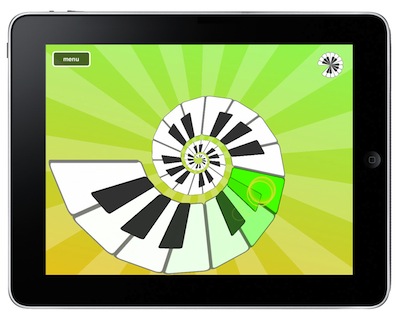 It’s not surprising that Smule, the startup behind cool musical iPhone applications like Ocarina and I Am T-Pain, has an app for Apple’s soon-to-debut iPad device, too — Magic Piano (iTunes link), which co-founder and chief technology officer Ge Wang describes as an “anti-piano.” Of course, I haven’t been able to play with the app yet, given that the iPad doesn’t go on sale till tomorrow, but I interviewed Wang about it, and about his perspective on the device’s potential.

“[The iPad is] something we’ve been waiting for, a coming-of-age for computer music geeks — and I count myself as one of those,” Wang said.

For one thing, the iPad allows 10 points of multi-touch interaction on its surface, instead of five. Now, most users probably haven’t had a “needs more multi-touch” moment with their iPhones, but you need that support if you’re going to replicate the experience of playing a piano keyboard. Or, in Smule’s case, if you’re going to offer a fun variation on the piano, where you can lay the keyboard out as a spiral or a circle. Magic Piano is also an instrument for people who don’t see themselves as musicians, because users can load up classic pieces such as Beethoven’s Fur Elise, then play the piece by following beams of light. Most of the technical skill is taken out of the equation, but you can still control the timing and the expression.

“We’re not entirely sure what we’ve built,” Wang said. “We know it’s something playful, whimsical, and musical that could not have been done on any other device.”

Wang added that he has ordered 20 iPads for the Stanford Mobile Phone Orchestra, a group that he heads as a professor in the university’s music department. Computer musicians are going to be particularly excited about playing with the touchscreen as a control device for other instruments, he predicted.

Smule has raised a total of $13.7 million. You can see brief video footage of Wang playing the Magic Piano in the video from ABC News below.