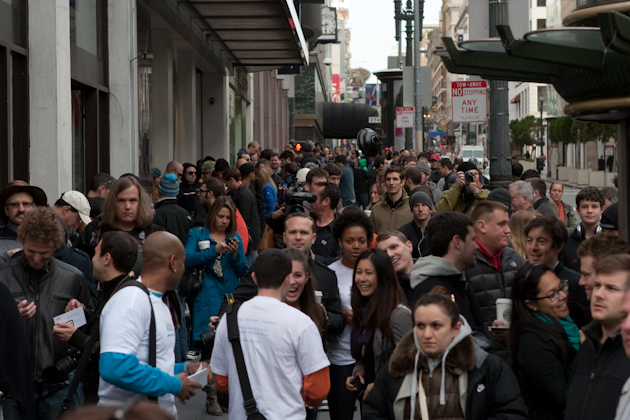 “Three … two … one … WOOOOOOOOOOHOOO!” The staff at Apple’s flagship store in San Francisco’s Union Square counted down to the moment when they opened the doors for over a hundred people lined up outside to buy one of Apple’s new tablet computers.

There are another 30 reporters and photographers covering the moment — I recognized staffers from The New York Times, TechCrunch, and Bloomberg — plus marketers and publicists promoting apps. 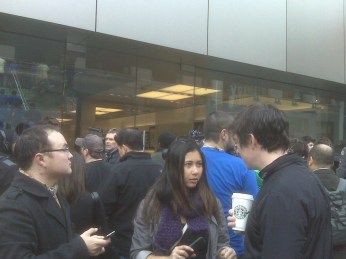 This being San Francisco, there are also a few protesters. Jon Worrel, who writes at Fudzilla.com, camped out overnight to tell the media why he’s not buying an iPad  because he doesn’t like the way Apple controls its platforms.

VentureBeat reporter JP Manninen is here with a camera and will post some better-quality photos soon. We’ll post an in-store review of the iPad, report on the zaniness out here on the sidewalk, and see what happens when we bring our JooJoo tablet (a competing tablet device built by Fusion Garage that’s due out soon) into the store.

Anthony Ha is at the Stonestown Apple Store on the other side of the city. He says the staff there have confirmed that he’ll be able to buy an iPad this morning. Look for his posts later today.