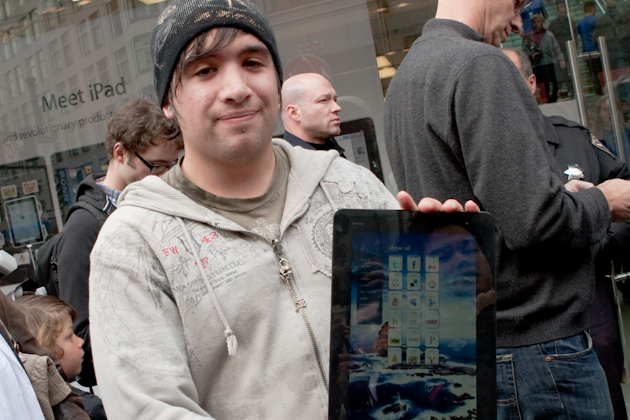 The JooJoo tablet, which recently began shipping to customers who had ordered online in December, doesn’t have anywhere near the buzz of Apple’s iPad. But it’s an interesting alternative that points out some of the iPad’s shortcomings — particularly to technologists who like to hack their gadgets.

Last night I stopped by the Apple Store in San Francisco’s Union Square, with a JooJoo in my backpack. College student Jon Worrel (pictured), a cognitive science major who writes for the Fudzilla website, led an ad-hoc review of the JooJoo by a dozen or so people socializing outside the store. This morning, Worrel, who camped outside the store to give the media his Apple gripe list, said the JooJoo is an encouraging device.

What makes the JooJoo different from an iPad?

First, it has a much bigger screen. The JooJoo’s display is 12.1 inches diagonally. The iPad is less then 10 inches. The JooJoo has several hundred more rows of pixels so that its display has widescreen video capability. You can hold it vertically and read more tweets at once, or you can flip it sideways and watch 16-by-9 videos on it. The screen was the biggest technology hurdle encountered by Fusion Garage, the 12-person Singapore company founded to build the JooJoo. It works, but it’s slower than an iPhone in side-by-side tests.

Second, the JooJoo doesn’t have an app store. It has a browser that runs Flash animations, videos and interfaces that the iPad deliberately refuses to load. The tablet’s home screen has a few dozen buttons for Twitter, Hulu, MSN, College Humor, and other Internet destinations. When you tap one, the JooJoo opens a URL in its browser. If you don’t have a Wi-Fi connection, your JooJoo is useless.

Third, the JooJoo is more aligned with the hackerly ideals expressed by people like Worrel and by author and activist Cory Doctorow, who published an anti-iPad manifesto earlier this week. It runs on Linux. It’s not glued shut — you can open it by removing ten screws on its backside. It doesn’t have a controlled platform for software development like Apple’s App Store, for which all apps must be approved by a slow and mysterious process.

On our test unit, people were impressed by the JooJoo’s pretty, tasteful, dare we say Apple-like user interface. It’s much more refined than we had expected. Tapping at it leisurely is a pleasant experience. It adjusts its brightness to match the ambient light level, or you can set it to one specific brightness.

It’s not perfect. Our group of testers frequently found that we had gotten the JooJoo’s browser into a non-responsive state in which tapping at it did nothing. We found ourselves wanting a button to reboot the browser without needing to turn the whole tablet off and on. There’s a USB jack for plugging in a keyboard or mouse. On both JooJoos I’ve handled, the jack’s cover plate fell off because it wasn’t glued on solidly.

The JooJoo also has a camera placed above the screen. But we’re not sure what to do with it yet. Fusion Garage hasn’t gotten back to us on that. Our test group tried Flash-based video chat, but couldn’t get it to work properly.

Worrel and others are excited about the JooJoo because it shows that a tablet doesn’t have to follow Apple’s every design decision. It can have a bigger screen. It can run Flash. It can live without an app store. And perhaps most important for technologists, it can have an open-source operating system and a removable cover for hackers who want to make it do things its manufacturer never imagined.