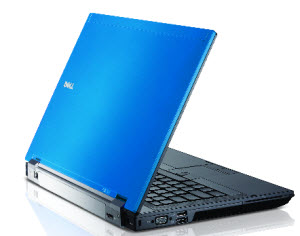 Take that, smartphones! Dell is launching a new line of laptops for corporate users with features that make it a lot easier to use your computer as your main communications device.

For instance, these laptops come with digital-array microphones, which are essentially a grid of microphones, to capture sound better for video conferencing or voice-over-Internet protocol calls. These features are becoming commonplace as corporations seek to simplify communications and cut costs, versus paying for expensive conferencing systems and cell-phone minutes.

Three new Latitude E-Family laptops are launching today. The E6410 has a 14-inch screen and the E6510 has a 15-inch screen, while the E6410ATG is built for rugged, all-terrain environments, a niche Panasonic currently dominates with its Toughbook lines. These new Dell models are thin and light machines that use the newest Core i5 and Core i7 microprocessors from Intel.

Patrick Burns, senior product marketing manager, said in an interview that the laptops focus on mobile collaboration and ease of use. They feature a button for instantly accessing your email or corporate website even if the machine hasn’t booted yet. Consumer laptops have similar instant-on features, but they’re usually geared for listening to music or watching movies.

The company is hoping that, now that the recession is subsiding and Microsoft’s robust, at-least-it’s-not-Vista Windows 7 operating system has launched, corporations will start spending again upgrading employee laptops. International Data Corp. estimates that corporate laptop unit sales will grow 27 percent in the next three years as the upgrade cycle kicks into full swing.

The laptops are a refresh of earlier models launched 18 months ago and they come in three colors: red, blue and a variation of silver. The cases are made of alloy of magnesium and they have zinc hinges. A 14-inch model weighs just 4.25 pounds. The laptops can operate six hours on a six-cell battery or nine hours on a nine-cell battery. The keyboard is backlit from underneath so you can see the keys in low light. The E6410 starts at $1,129 and goes up from there, depending on options. The E6510 starts at $1,164.