Editor's note: Think Modern Warfare 2's kill-the-innocents No Russian level is controversial? Think again. Chris gives a new perspective on in-game violence and is willing to bet the mental welfare of his hypothetical future son on it. -Shoe

Devil's advocate time. Let's assume for a second that anti-games lawyer Jack Thompson, Fox News, the Daily Mail, and that Australian guy no one likes is right. Games! They're evil things, inspiring you to maim, murder, take drugs, engage in promiscuous sex, and become an all-round bad egg.

I bet you, my average hardcore Internet-equipped gamer friend, can feel your blood pressure rising already at the premise, right? Actually, both sides of the games-and-violence debate manage to irk me to no end whenever it rears its ugly head. Both the "we're an art form" and the "you're the anti-Christ" camps manage to inadvertently (or not) abuse statistics and syntax. Gamers with a little knowledge can happily call shenanigans when lazy journalists claim X percent of murderers have played a game at some point (correlation is not causation, so the two pieces of information may be irrelevant to one another).

Conversely, though, we in the games-loving camp will often tout papers by folks like Texas A&M University's C.J. Ferguson (check this for what is certainly a better researched debate than the one you're reading) as gospel truth that video games don't cause violence, when most with common sense will tell you no evidence of a link is not the same as evidence of no link. Just because — as some joker put it — your window's closed in the morning as it was at night doesn't mean I didn't sneak in your room while you were asleep and sniff all your underwear. Or something.

So with reasonable doubt on both sides, let's give the nutters the benefit of the doubt for a change, shall we? If games are harmful, what do you think is worse for a morally dubious teen to play?

Modern Warfare 2's No Russian level was as clear an attempt to court controversy as Mortal Kombat's Fatalities. It never really managed to gain all that much traction in the mainstream press, but it certainly had gamers talking before the title's release. This was all at once pushing the envelope and helping the medium to be taken more seriously and going a bit too far, depending on whom you listened to.

How you would play the shocking airport level in which you, cast as an undercover agent infiltrating a terrorist cell, are charged with shooting a terminal full of innocents was a major talking point for a while. Whether you went in and shot everyone up, just took in the atmosphere, or skipped the section altogether, it's hard not to argue the unsettling atmosphere of the scene (in isolation, anyway — any artistic effect this might have had got lost by the rest of the game being just so undeniably silly). 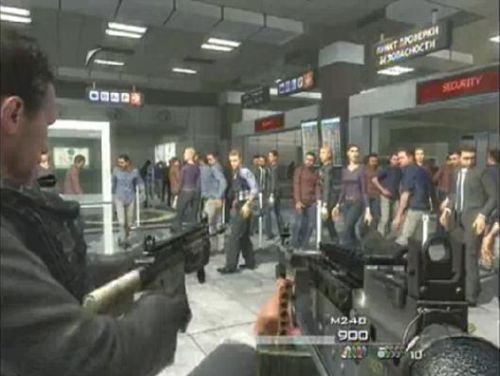 Uncharted 2, meanwhile, was a spectacular blockbuster gaming romp. Garnering a Teen rating in the U.S., a 15 in the UK, and a moderate C rating in Japan (Japanese content ratings run the alphabetical gamut from A for "A-OK" to Z for "ZOMG, you just shot his head off"). Sure you'll find a splash of blood here and there, but the "Uncharted 2 killed my son" stories wouldn't hit the front pages of tabloid rags, would they?

Here's the thing, though — I felt distinctly more uncomfortable with aspects of Uncharted than I ever did with Modern Warfare, and the difference is one of motive.

In MW2, the terrorists give you a machine gun and tell you to kill everybody standing in your way, but hey, you're a "soldier" — it's your job. The game might call into question the morality of following orders in its own ham-fisted, shoddy way, but ultimately, little in your actions within the game can be too ethically dubious. After all, you're acting in self-defense most of the way. Even in No Russian, the backstory of trying to maintain your cover with the terrorists will help you live with yourself should you choose to open fire

Meanwhile, at the start of Uncharted 2, Drake — that is, you — sneaks into a museum to steal an artifact. He insists on dealing with the patrolling guards stealthily in a prior cutscene. It's shocking then, when halfway through the level, and merely as an excuse for a tutorial introducing the stealth takedown when hanging from a ledge, you pull an unsuspecting guard over a balcony and toss him to the jagged rocks some 70 feet beneath you. 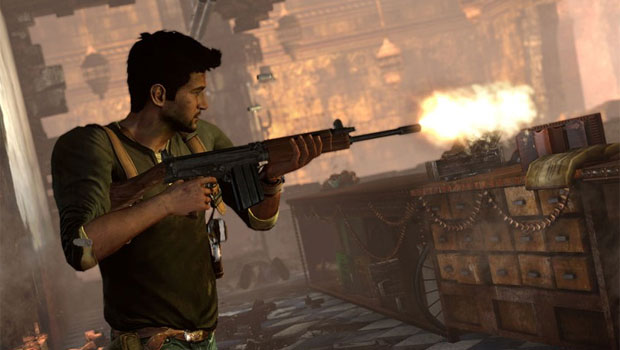 And thus starts a cavalcade of killing. And while for the most part, the other guys are shooting first, with stealth attacks being a bigger part of this sequel over its predecessor, why do sneaky takedowns nearly always lead to a snapped neck rather than a choke hold and a headache a couple of hours later? Why does Drake — so initially concerned about opening fire on people — never question his own actions, instead rattling off cold one-liners? After all, here is no soldier, but a thief, and despite being so likable in his dialogue, his actions are incongruous with the character.

While MW2's violence in essential to the game's existence, you almost get a sense in Uncharted that the combat is there to pad the story and give the player something to do in between the spectacular set pieces and the platforming. For all its interactive-movie ambitions, an Uncharted film would inarguably have a much lower body count. Most telling is its self awareness — in taking down the final boss you are challenged: "You think I'm a monster, but how many people have you killed, just today?" A valid point…but one that seems to have little influence on Drake.

Gratuitous violence in games, then, doesn't so much have to do with opportunity to kill but the motives presented. To that end, I'd probably be happier if my hypothetical teenage son was playing Modern Warfare over Uncharted — just as long as he wasn't spouting racial epithets online.

If you see my face in the paper in 20 years as the parent of a kid gone nuts, you'll know what to blame.