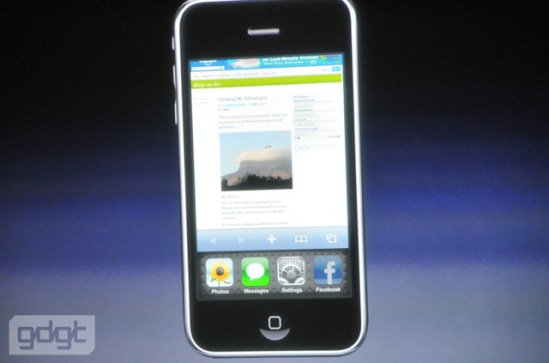 Steve Jobs announced in a press event today that the iPhone will finally receive multitasking capabilities in version 4.0 of the iPhone operating system — which is due to hit sometime this summer. Since the iPad also runs the iPhone OS, this means that it will be receiving multitasking as well.

We previously speculated that multitasking — the ability to run third-party iPhone applications in the background — would be a major announcement at today’s Apple event, and Jobs didn’t disappoint. According to GDGT’s live coverage of the event, he prefaced the announcement by saying:

In true Apple fashion, the multitasking interface that Jobs demonstrated looked simple and easy to use. When inside any application in iPhone OS 4.0, you just need to double-tap on the home screen to bring up a list of applications currently running. Jobs was able to seamlessly move between a game (Tap Tap Revenge), an eBay app, his mail, and a web browser without much fuss. 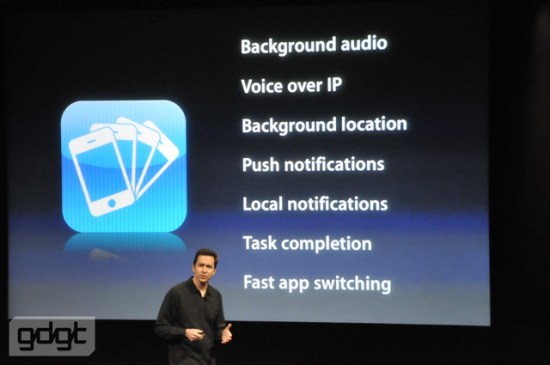 Jobs then turned the stage over to Scott Forstall, senior VP of iPhone software, who went on to list seven multitasking services that would be available to app developers:

While this multitasking implementation is a big step for Apple, it’s still technically not true multitasking, since apps can’t remain fully functional in the background. As Jobs mentioned, Apple’s main concern was implementing multitasking without sacrificing battery life or system performance — so it makes sense for the company to be a lot particular.

I’d instead call it “smart” multitasking, since it allows specific functions in applications to run in the background. The fast app switching feature will make it appear as if the apps always remained running in the background, so some users may not ever notice the lack of full multitasking.

Jobs also announced that multitasking would only be available for the iPhone 3GS, third-generation iPod Touch (released last fall), and the iPad. The iPad will receive the OS 4.0 update in the fall, while the iPhone will get it sometime in the summer. The iPhone 3G and earlier iPod Touch models simply don’t have the hardware to support the feature, but that’s no great surprise.

I suspect that there are still many iPhone OS 4.0 features that haven’t been announced yet — in particular, those that will rely on new hardware in the next-generation iPhone. So if you were hoping to see Apple introduce video conferencing into the OS, I suggest waiting until this summer before you give up entirely.