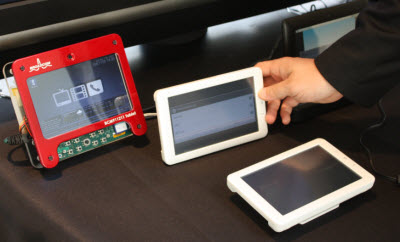 Broadcom didn’t get the business for the main processor in Apple’s iPad tablet, since Apple is designing that chip itself and having it fabricated by Samsung. But its chips will be powering a number of other tablets due out later this year.

Irvine, Calif.-based Broadcom is a big believer in tablet computers (and is in full agreement this is the year of the tablet, as said by Nvidia’s chief Jen-Hsun Huang). As it showed at the Consumer Electronics Show in January and demonstrated again this week in San Francisco, it has created a platform consisting of four chips that can be used as the foundation for a tablet computer.

Tablets built on those chips will arrive over the next few months and will be introduced with a variety of business models by companies such as cell phone carriers and telecom companies.

NTT has shown off the Hikari iFrame tablet computer that it will give away for free to those who subscribe to either its broadband or phone service. Other ODMs include Askey, LG Nortel, and Moimstone.

“Not all tablets are created equal,” Humphries said. ” Some complement what we have, and some will replace the devices we use today. But we know there will be multiple distinct products in the home.” 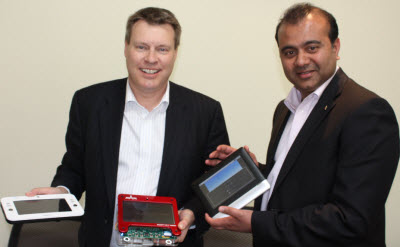 Broadcom showed off tablets based on its protoype (reference design) that will be able to serve as remote controls in the digital home, turning on TVs, playing video streamed over wireless networks to various TVs in the house. They could be used for a variety of purposes, including a video conferencing system within the home. This kind of tablet plays to Broadcom’s strengths, as it has chips in everything from home Wi-Fi routers to set-top boxes.

Humphries (pictured, left, next to Kumi Thiruchelvam, director, strategic business development at Broadcom) said that many of the devices may come with cheaper 7-inch touchscreens and will be given away for free, in contrast to the $499 iPad. They could be subsidized by plans where consumers agree to a two-year subscription service for a TV or broadband service. They could run the Android operating system and be targeted at people who wouldn’t otherwise buy a device for luxury entertainment purposes. Why is the market more likely to take off this year? One reason is there is much broader support for the Android operating system this year.

Rivals include Apple itself, as well as Nvidia, Intel (with its Atom platform), Marvell, and Freescale. Broadcom argues that it has a more comprehensive approach with chips including an applications processor, digital signal processor, graphics and video chip, and communications chip.