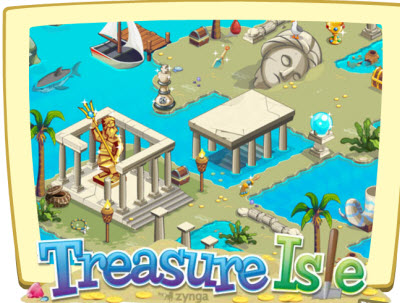 Zynga‘s newest game, Treasure Isle, has quickly grown to 4.3 million users since the company announced the game a week ago. It’s a clone of another game in a genre borrowed from casual game web sites (zSlide’s Treasure Madness). But it looks like it will do the job of stopping a slide in users at Zynga.

Although it’s still the most successful Facebook game company, four of Zynga’s six major games have been losing traffic, according to SecondShares.com. (More about that in our story about Zynga’s $5 billion valuation.) Another recent game, Poker Blitz, hasn’t done that well in its first three weeks.

Treasure Isle is taking off faster than the company’s FarmVille game, which has 83 million monthly active users (according to AppData) and remains by far the biggest hit on Facebook. And Treasure Isle is managing to grow fast despite Facebook’s recent restrictions on viral growth channels — and despite the fact that Zynga hasn’t even fully launched its cross-marketing programs where it uses one game to sell another.

Jeremy Verba, general manager for the Treasure Isle game, told Inside Social Games that the title has strong engagement, meaning players play for a long time and come back often. The game is hugely important for Zynga, which needs to keep running on the treadmill.

The game may be a clone of Treasure Madness (which has around three million monthly active users), but then again, FarmVille was a clone too, of the less successful original Facebook game, FarmTown.

The next major test is to see how long players will stick with Treasure Isle and how well the game monetizes. Of Zynga’s many games, a handful of the titles — Mafia Wars, FarmVille, and poker — provide the bulk of revenues.