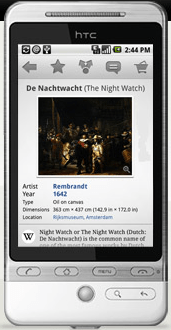 Google has purchased Plink, a startup that focuses on mobile visual search, according to the Guardian. The deal marks the first UK startup purchase for Google, the details of which have not been made public.

Plink’s only product thus far is PlinkArt, an Android application that lets you identify any work of art by taking a photo of it. The app has been successful among art aficionados. Its developers — PhD students Mark Cummins and James Philbin — report that the app was downloaded more than 50,000 times in six weeks after its launch. PlinkArt currently has data for tens of thousands of famous paintings.

The developers will be moving to Santa Monica, Calif., to work on Google Goggles, Google’s visual search endeavor on Android phones. Goggles allows Android users to take a picture of anything to learn more about it, and Google has already used it to dabble in art recognition. By acquiring Plink, Google will bolster Goggles’ art recognition capabilities even further.

There’s no word yet on what the acquisition means for the PlinkArt app. The company was considering developing an iPhone version of the app, but it’s very likely that Google nixed any possibility of that with the purchase.

Google has been working on Goggles for about two years now and confirmed recently that it will be bringing it to other platforms eventually, including the iPhone. Google definitely sees a future in visual search, which would allow smartphone users to look up information in a natural way without typing into a search box. It’s also one of a trifecta of innovating mobile search technologies that Google is exploring; the other two are location-based search and searching by voice.

Plink recentlywon $100,000 as the winner of the Education/Reference category in the most recent Android Developer’s Challenge, according to the Guardian.