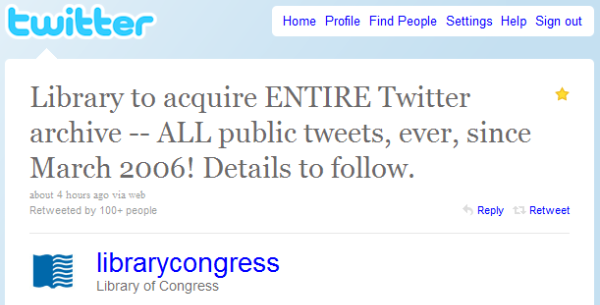 Amidst much Twitter-related news today, thanks in large part to Twitter’s Chirp developer conference, came a surprising announcement courtesy of the Library of Congress’s Twitter account: The Library will soon be home to Twitter’s entire public archive of tweets.

That’s a lot of tweets, as the Library mentions in a blog post about the announcement. The microblogging service’s most recent numbers show that over 50 million tweets are made per day, with an average of 600 tweets per second. Twitter also announced today that it has over 105 million registered users, with 300,000 added every day. It will be a monumental task to back up Twitter’s already massive archive, but the Library will also have to keep pace with Twitter’s ever-increasing popularity.

The Library’s director of communications Matt Raymond hinted that we would see an emphasis on scholarly and research uses of the data. He was particularly excited at what the data could teach us about ourselves. While Twitter is home to some important tweets — like Barack Obama’s celebratory  tweet after he won the 2008 election — it’s also home to tweets that show users reacting to events in real time, conversations with friends, and yes, tweets about your breakfast and lunch.

Ars Technica’s Nate Anderson suggests that all tweets, even the most mundane, could have tremendous historical value:

There’s been a turn toward historicism in academic circles over the last few decades, a turn that emphasizes not just official histories and novels but the diaries of women who never wrote for publication, or the oral histories of soldiers from the Civil War, or the letters written by a sawmill owner. The idea is to better understand the context of a time and place, to understand the way that all kinds of people thought and lived, and to get away from an older scholarship that privileged the productions of (usually) elite males.

Of course, not everyone will see the same value with housing tweets in the worlds largest library, but the news still adds a significant amount of legitimacy to the idea of microblogging. Most importantly, it helps cement Twitter’s image as the go-to source for this real-time data.

It’s unlikely that Facebook’s status updates will receive similar treatment because those are mostly private, unlike Twitter’s focus on a global public conversation. And aside from Facebook, there aren’t any other major microblogging competitors for Twitter to worry about — yet.