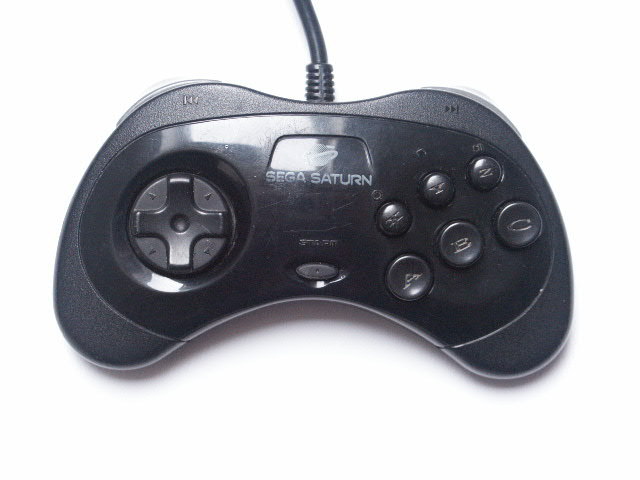 This is an image of what is perhaps the greatest design in hand-to-console-communication-via-a-plastic-encased-piece-of-circuity.

A direct descendent of Sega's 6-button controller (runner-up bestest controller) the Saturn controller received slight modifications in shape, and the addition of two shoulder buttons. You don't need grand modifications when you start with a great design. Nintendo's unwillingness to have controllers grow from their immediate predecessor has bothered me since they released the N64. But then the company makes billions, its executives millions, and I complain about it on a blog. So clearly I am qualified to put down their success.

Anyway, back to the Saturn's controller: sublime, isn't it? Just look at it. You don't need anything else. Eight buttons and a good d-pad. Built for a 2-D sprite-based gaming. So what if 2-D games weren't going to be the norm within even a year of the Saturn's launch? The controller is still fantastic for them. Capcom and MadCatz blatantly based the Street Fighter IV branded fight pads on the Saturn controller. Incontrovertible proof  that even 15 years after the Saturn launched the design hasn't been surpassed for 2-D gaming. Hell, Sega itself is manufacturing new controllers on this design for their Play Sega online emulation site.

I mean, sure, the controller loses some luster outside of 2-D games, but the original PlayStation controller was a terrible choice for a console whose company was encouraging 3-D games. It was well over 2 years between the PlayStation's launch and the release of Sony's original Dual Analog controller. Of course Sony's done what I criticized Nintendo for not doing in the second paragraph, and I applaud them for that. My hands and brain don't have to establish new and unfamiliar dexterous communications. Even so, I'm not a big fan of Sony's controllers. The current PS3 controller design bothers me so much I find myself reluctant to play even the great exclusives my PS3 has. I dislike those analog sticks' placement and the movement of the secondary shoulder buttons.

What I love most about the Saturn controller are the six face buttons. Two rows of three columns, your fingers knew where they were based on a button's size and shape. A convex button means you're on the top row; a concave tells you you're on the bottom row. Six buttons on a wide open plain. Great for fighting games which I must admit is why I'm so devoted to this design. As near arcade perfect ports for your home as you could get with a controller perfectly suited to them. I don't doubt Sega had fighting games as a heavy consideration in its design. While not great for 3-D games the eight-way d-pad afforded at least slightly more precision than PlayStation's partially submerged d-pad, and Sega's didn't make my thumbs sore. Atlhough honestly neither were great, serviceable, but not great.

The Saturn controller  was perfectly designed to its task. The Saturn was conceived as a 2-D sprite powerhouse and Sega already had a great design in its Genesis 6-button controller. Alter the shape a bit, add two shoulder buttons and you're golden. I may not always feel this was the greatest controller ever. "Always" and "ever" are long times after all , and I'm not prescient. But I feel confident in saying this was one of the greatest controllers made. Its design was comfortable, the layout of the buttons were fantastic, and it had a good d-pad.

Wow, all this reminiscing made me think of how much time I spent playing Sega's consoles. Then I think of how Sega is currently. Damn it hurts to be a Sega fan of old.