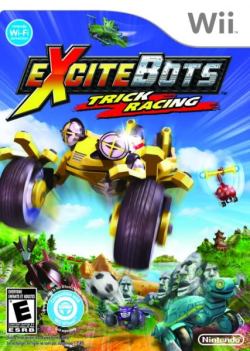 Is the word ‘extreme’ part of your vocabulary? If so, there’s a chance you’ve torn up a dirt road or two while riding your unwieldy bike or ridiculously large truck. Okay, maybe you’ve only done that on your NES, Nintendo 64, or Wii, but that still counts. What I’m trying to say is, if you’ve enjoyed any game in Nintendo’s famous offroad Excite series, then perhaps you should look at Nintendo’s latest Wiilease.

Sorry for the bad pun, but if you like endangering your life with unusual vehicles on your TV screen or otherwise, then you may want to keep reading, as I’m about to give you the scoop on Nintendo’s latest offroad racer, Excitebots.

This arcade-style racer closely follows the gameplay mechanics introduced in Excite Truck, but makes them crazy enough for any insane asylum patient to appreciate. You won’t find any Sweet Tooth-esque clowns in this dirty racer, but you will find oddities that range from poker cards to music notes. I’ll explain these unusual additions in a moment, but first let me enlighten you on how Excitebots is similar to Excite Truck (besides the name of course).

If you’ve played Excite Truck, you already know that this fairly popular Wii launch title had you guiding a handful of trucks over large slopes in the hopes of gaining mega air. Even though these stunts alone made your Mt. Dew drenched innards burst — they weren’t the only thing that made this game more extreme than riding a unicycle on top of a cheetah. It was the motion controls that made your extreme personality become one with the Wii. 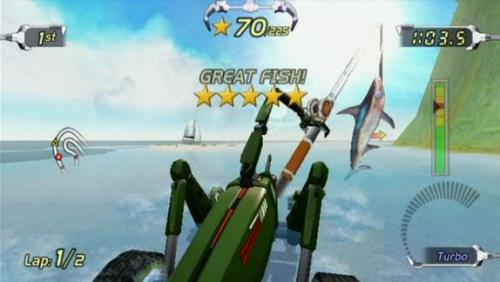 The Wii Motion driving experience wasn’t quite as precise as the controls of the best arcade racers, but it certainly added to the casual fun of Excite Truck. What was even better, however, was the constantly changing terrain triggered by the player hitting circular question mark buttons.

Say you were hauling ass in the desert, but didn’t appreciate a course’s expansive, yet flat terrain. You could then hit a question mark and make a small mountain appear that would terrify Evel Knievel. This constantly changing terrain along with Excite Truck’s branching paths made the game one hell of a racer. 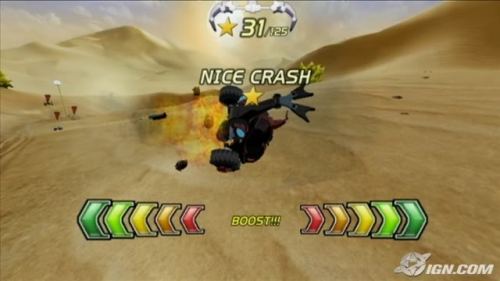 But there was a problem — this full-priced game was quite short. Did Excitebots manage to overcome this flaw that dragged Excite Truck through the mud? My conclusion will be revealed, after I cover Excitebots’ numerous gameplay enhancements.

In Excitebots, you’ll tear through dense jungles, tranquil beaches, snow-capped peaks, and a variety of other environments with your large vehicle, while hitting large jumps and altering the terrain. Of course this all sounds similar to Excitebots, so what’s new?

For starters, there are no trucks this time. As you might imagine, you’ll be driving robots instead (as the title implies), but these are no chatty androids or pokey R2D2s. Instead, you’ll drive bots that represent various creatures of the animal kingdom. In Excitebots, you’ll find a sizeable collection of bots ranging from frogs to grasshoppers.

Unlike Excite Truck’s paltry selection of oversized vehicles, you’ll find an assortment of mechanical animals that have vastly different stats. Unfortunately, these stats aren’t as clear as they should be, so you may want to peruse message boards to find a bot of your liking; otherwise, you’ll just have to experiment. 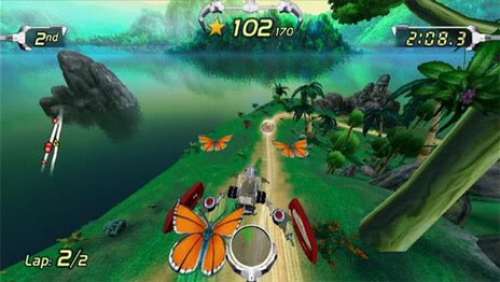 Once you’ve picked a sleek bot, you can enter a tutorial or the game’s first race. The tutorial is fairly brief and will explain turbo, how to get the most out your jump, and the spin dash, so you may want to pay attention. But if you’re feeling daring, don’t hesitate to start racing.

In Excitebots’ main mode, you’ll tour the world, racing through twenty-four courses in eleven different countries. You’ll begin by entering the School Cup, which consists of four courses, and you’ll continue to advance until you reach the Platinum Cup.

Each course has terrain similar to what you’d find in Excite Truck (i.e. large hills, desert cacti, lakes, forests, etc.), but there’s more track variation, and there are a number of oddities designed to give you points.

Unlike Excite Truck, tricks are just as important as obtaining first place, and there are numerous obstacles to help you rack up points. If you’d like to earn stars (the game’s points), you can power slide, crash into opponents, land smoothly, spin through the air, and clear one of the many obstacles in your path.

These obstacles range from wires that block your path to jeering clowns. If you encounter a red horizontal wire, you’ll want to grip your Wiimote and make a small circular motion ten times, while gradually speeding up to match the velocity of the on-screen indicator. If you’ve built up enough speed, you’ll earn a whopping ten stars, and your momentum will propel you through the air.

There are other wires you’ll encounter as well that will release you with a single well-timed push motion, and some will even have you doing 1080 degree back flips. Some of these maneuvers are a bit tricky to accomplish, because the timing and motion you’re supposed to perform aren’t always clear, but it certainly adds some variety to the gameplay.

Besides wires, you’ll come in contact with a number of sports-themed obstacles. Sometimes, you’ll notice 10 bowling pins, and as you might guess, you simply need to drive into them, which will earn you as many stars as the number of pins you’ve knocked down. Besides bowling, you’ll also find yourself ramming soccer balls into a net, kicking field goals, hitting home runs, and throwing a pie in the face of a clown. There are a few more, but you get the gist of Excitebots’ quirkiness. 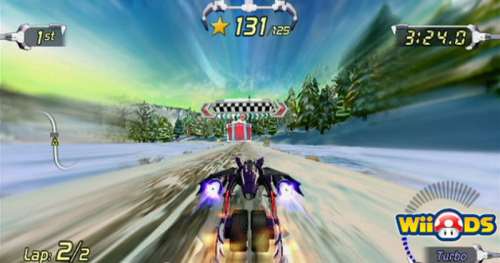 These moves are generally easy to perform (you usually just need to tap the A button or run into the object), and add much needed variety to the gameplay. Sometimes, you’ll also encounter items that can be used to attack opponents, but they aren’t as plentiful as in a game such as Mario Kart, because your main intent here is to earn stars.

I should briefly mention one more gameplay mechanic, and that’s the transformation of your four-legged bot into bipedal and flying robots. When you encounter a certain item, your bot will transform and stand vertically, which significantly changes the gameplay. While in this form, you’ll move via tilting the Wiimote from left to right quickly. This new movement style takes awhile to adapt to, but it’ll eventually enable you to move faster, crash through trees, and fly if you find certain platforms. 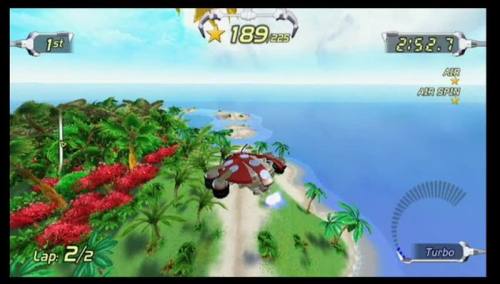 In a few courses, you’ll discover yellow and black platforms that’ll enable you to fly. While in this mode, you simply need to tilt your remote forwards and backwards, doing your best to stay airborne. You probably won’t remain in the air too long on your first attempt, but it’s important to fly into butterfly icons if you can, because they’ll reward you with an impressive star collection.

So why are all these stars necessary? They factor into your score, just as your timing does. At the end of each course, you’ll earn a rank that ranges between F and S. Of course the S rank is ideal, but you’ll be able to play the majority of the game’s courses with an easily attainable B rank. 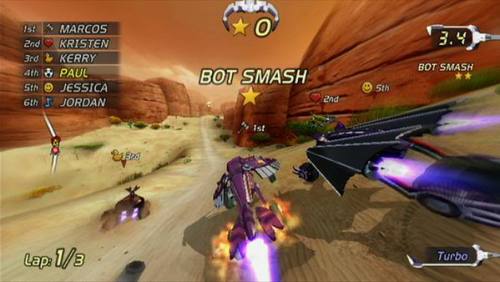 Besides enabling you to unlock courses, stars also allow you to purchase better vehicles and enter Super Excite mode that presents more challenging versions of the courses. These new vehicles are worth striving for, but be prepared to put in several hours.

Excitebots is a fairly brief experience like its predecessor, but there are a few additional modes that’ll briefly keep your attention. If you’re a fan of Poker, you may want to check out Poker Mode which has you running into cards and making sets such as ‘Three of a Kind’.

If you’re like me and aren’t a Poker fan, you might want to check out two-player split-screen, a plethora of mini-games, and online racing (including Poker matches). If you enjoyed the single-player experience and own a large TV, split-screen can be a lot of fun, as you’ll be competing with your friend for trick points and the time it takes to reach the finish line. I noticed that there’s a bit of slowdown, but it’s so minor that it won’t really hamper your experience. Two-player mode will probably keep you and a buddy busy for awhile, but your other friends will be forced to sit and watch how “extreme” you are due to a lack of a four-player mode. 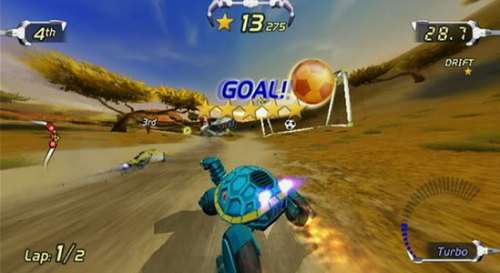 Once you’re tired of playing with your friend, you can revisit a number of sports you encountered during the main game. These sports challenges are quite fun, but you probably won’t be replaying them ad nauseam unless you’re insane.

Fortunately, there’s a robust online mode that’ll keep your sanity meter from depleting. In Excitebots’ online lobby, you can hook up with friends or six random players and race on any course of your choosing. The lobby system is quite efficient, and I was still able to find matches during the afternoon and evening several months after the game’s release. You may have to wait for a match to finish, but it’s worth it to square off against five other racers in a lag-free match. 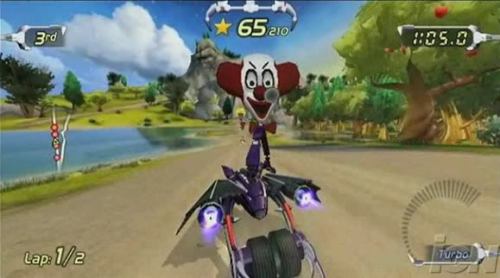 The online gameplay experience is generally the same as the offline mode, but here you can see other players’ stats and bet stars to improve your stockpile. If you think you’ll have a good chance of winning, you can bet up to 2500 stars (100-200 or obtained in an average race), so you can come away quite wealthy if you succeed. This betting system definitely makes races more exciting, and it makes me wish that more games would implement it.

Excitebots is an enjoyable racing game with constantly changing terrain, extreme jumps, and wacky sports related additions, but it’s a relatively short title for fifty bucks. The game runs at a smooth clip and has solid visuals for the Wii, but sometimes you’ll think you’re playing a game from the 64-bit era. That’s not necessarily a bad thing if you miss arcade racers with high-flying jumps, but it might not be enough to entice cynical adults. If you don’t mind a relatively small course offering and are looking for a wacky racer, Excitebots isn’t a bad buy (especially at a price of twenty bucks or less), but most people will be better off purchasing a game that provides more long term value. I mean after all, wouldn’t you rather have a game that gives your friends Wiinus envy?