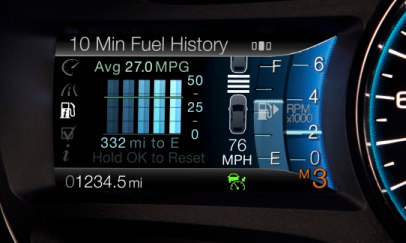 Ford, which has been relatively hush-hush about its green car projects compared to General Motors and Nissan, is integrating eco-conscious features into its yet-unlaunched MyFord Touch in-vehicle software system. The new Eco-Route tool, in particular, is designed to teach drivers how to be more fuel efficient, the company says.

Now when Ford drivers fire up their navigation systems, they will have the ability to choose a route that prioritizes fuel economy over speed or distance. These “greener” routes avoid traffic-heavy highways and direct drivers to streets where they can maintain a consistent speed without a lot of starts and stops (that actually sounds pretty nice). Ford — which seems to be following in Garmin’s footsteps — says that drivers that choose the Eco-Route option can see up to a 15 percent improvement in mileage.

Other MyFord Touch (pictured above) features allow drivers to track their vehicles’ fuel economy and mile-per-gallon averages in real time. A dashboard displays this data for the past 5, 10 and 30-minute intervals in colorful bar charts.

This way, drivers have access to all the information they need to change their behavior to save fuel and money. The upshot is that people actually learn over time how to optimize their fuel performance. Behavioral change doesn’t come easy, but the company believes this is one way to keep reinforcing the same lesson.

The MyFord Touch software — positioned as a media hub, internet access point, and GPS navigation system — will hit the market this summer, built into the 2011 Ford Edge, and will be available worldwide in the 2012 Ford Focus. A variation for the company’s Lincoln brand, called MyLincoln Touch, will also launch with the 2011 Lincoln MKX, the company says.

This isn’t the first time that Ford has tried to encourage green driving tactics. Its SmartGauge system, installed in the 2010 Ford Fusion Hybrid and Mercury Milan Hybrid, also tracks real-time fuel data. It shows drivers how fuel-efficiently they are driving with a graphic of growing leaves and flowers — another example of how gaming mechanics are working their way into every day life. The MyFord Touch builds on these concepts, providing a wider array of driving and fuel data, Ford says.

The automotive giant isn’t necessarily dragging its heels when it comes to green car development. But its all-electric Ford Focus — slated to launch by the end of 2011 — hasn’t commanded as much attention as the Chevy Volt, Nissan Leaf or Tesla’s impending Model S. It’s unclear when it will start ratcheting up its marketing strategy.

In the meantime, Ford seems to be making smart plays at the edges of the advanced transportation space. The new MyFord Touch features fit neatly into this category. And at the end of last month, it announced that it was teaming up with Microsoft’s Hohm energy management product to improve the way people will charge their plug-in vehicles in the future.

While GM and others focus on churning cars out — and in some cases, their batteries — Ford has a chance to address some of the major infrastructural challenges standing between next generation vehicles and mass market adoption. But whether this will be enough to keep it neck-and-neck with the competition remains to be seen.

Here’s a video of the MyFord Touch tools in action: