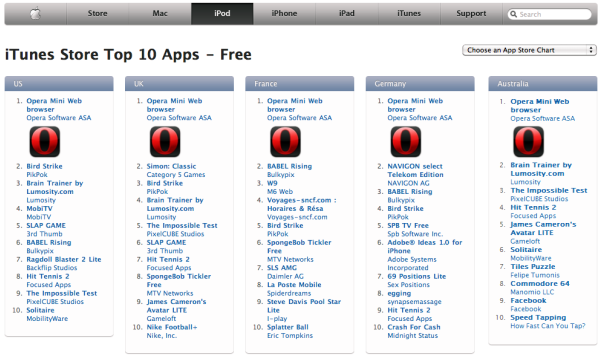 Opera Software’s publicity stunts have paid off in many ways. The browser maker used a series of stunts to pressure Apple into accepting its Opera Mini iPhone app, and now Opera’s underdog struggle has led to massive support for the app as well. It announced today that Opera Mini for iPhone has been downloaded over 1 million times since its release on April 12. In addition, the app is also at the top of all twenty-two iTunes App Stores worldwide.

That Opera Mini made it through Apple’s iTunes Store approval process is a major accomplishment. Apple relaxed its rules to allow for third-party browser applications on the iPhone a year ago, but they were restricted to the WebKit browser framework (which Safari also uses). Opera Mini is based on Opera’s proprietary Web-browsing engine, so it technically should never have been approved. In this case, it’s hard to conclude that Opera’s loud publicity stunts didn’t make a difference.

Apple could have also been trying to avoid legal trouble with the Norwegian browser maker. Opera was previously at the heart of the most recent European legal case against Microsoft’s antitrust behavior with Internet Explorer — which led to Microsoft implementing a browser choice screen for European Windows users. Apple could have accepted Opera Mini simply to avoid a similar fate.

It points to tactics that iPhone developers could copy to push their apps through Apple’s rigorous screening process. Not every software developer, though, has the avid public following Opera does — and high-pressure PR tactics could backfire. Google, for example, wasn’t able to get its Google Voice Internet-calling app on the iPhone.

Whatever the reason Opera Mini was accepted, it’s good news for consumers and other Web-browser developers. It’s simply nice to have a choice of browsers, and eventually this could apply to other built-in iPhone applications as well.