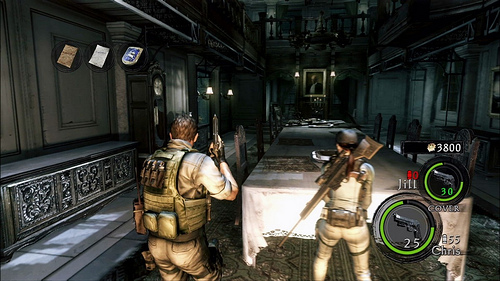 For better or worse, Resident Evil 5 abandoned much of what made the successful survival horror franchise unique: dark, spooky environments were replaced with a sun-bleached African locale and rather than emphasizing ammo conservation or puzzle solving, the game focused on action like a third-person shooter. Playing the new Lost in Nightmares chapter felt like a trip back in time, evoking memories of both 2009 and 1996.

Let’s get one thing straight: I enjoyed the hell out of Resident Evil 5 and was surprised to see it omitted from the Game of the Year conversation. The online co-op and abundant sunshine might have reduced the horror aspect of the game, but I had no qualms with the stop-and-shoot combat that irked so many others. I played through the game in its entirety at least three times and earned nearly every Trophy in the process (damn you, Ndesu, for ruining my Professional playthrough).

That said, since I put the game down last summer I’ve played a lot of first and third-person action games that made Resident Evil 5 look pretty clunky. The storytelling and atmosphere in BioShock are superb by any standards but felt especially powerful when contrasted with the simplistic B-movie nonsense that Resident Evil games have always featured. Batman Arham Asylum isn’t a shooter but the superhero’s fast-paced melee combat was much more entertaining than the plodding physical attacks of Chris and Sheeva. I’ve also spent the better part of three months playing four-player co-op in Borderlands. All this forced me to wonder if the transition back to slow-moving two-player action would be an awkward one.

Happily, Resident Evil 5 proved to be worthy of another look. After facing down manic Splicers, rampaging Titans and BadAss Skags in the aforementioned games, taking my time and aiming my laser sight felt downright leisurely. Maybe it’s a sign that I’m getting older, but I find tremendous value in games that let me think and plan my next move.

Resident Evil 5: Lost in Nightmares was definitely created with my old ass in mind because it turns back the clock and presents itself more like the original Resident Evil game. Gone are the zombie hordes, the African sunlight, the vehicle sections, and the virtual armory I once carried on my back. Instead it takes place in a streamlined version of the original Spencer Mansion which, as it turns out, creeps me out today just as much as it did 14 years ago.

When Chris and Jill set foot in that wide-open foyer, I was struck by a feeling of both security and distress. I remembered the layout of the mansion and that the entrance was always a relatively safe place, but at the same time I knew that the game knew that I knew that, so my brain was on edge in anticipation of a twist around every corner. I was convinced that at any moment, a zombie was going to come down the stairs or a dog was going to jump through a window.

Of course, the game preyed upon my fears, but not in that way. Instead, it toyed with me. When either character ascends the main staircase, a corpse falls from above. It’s not a zombie, just a regular dead person, but my friend and I made sure to stab at it with our knifes to be sure. When we entered that narrow hallway where those dogs famously leapt into view, we treated each window pane like a live grenade. The dogs never came, but when we least expected it a small bat broke the glass and freaked us both out.

Indeed, Lost in Nightmares contains very few enemies but that doesn’t take away from the tension. If anything, our nerves ran higher as we approached each new doorway with extreme caution. Those monsters that do show up are genuinely hideous and formidable opponents. Picture Quasimodo with a festering mucus sac for a hump, a mutant eye on his back and wielding a ship’s anchor like an axe and you’ve got the abomination that was chasing us around the mansion.

The scariest part of the Lost in Nightmares level is undoubtedly the twisted maze-like section where Chris and Jill find themselves after a fall. After having established the ferocity of the anchor-creatures, the game strips you of all your firearms and sticks you into a cat-and-mouse chase. There are traps available to slay the beasts, but these require one player to act as bait. It’s wonderfully effective at frightening players while forcing them to cooperate, although I wouldn’t want to try it with a AI partner.

Sadly, things do fall apart at the end. The showdown with Wesker is a true anti-climax: the outcome of the battle is predetermined (as this chapter is a prologue to the main story of Resident Evil 5) and gameplay-wise, there’s little to do but run in circles and engage in quick-time events to dodge and counter Wesker’s attacks.

Speaking of endings, I’m tempted to say that Lost in Nightmares is too short but I’m not sure that’s true. The entire level can be finished in less than hour so there’s no option to save and quit (though there are plenty of checkpoints should you die). Were it any longer that balance and the pacing would likely suffer under the weight of more monsters and extra puzzles.

No, I believe that nagging feeling that something is missing is just my brain yearning for another classic Resident Evil game where the mood is one of lurking terror rather than constant combat. Trap me in a house with no obvious means of escape and whether I’ve got a partner or not, I’m going to be scared.

Ultimately, what Lost in Nightmares represents is a declaration to the world that Resident Evil still has what it takes to frighten and unnerve players. While I feel there’s a place for “action horror” games like Resident Evil 4 and 5, I hope that Capcom considers a full-on revival with a claustrophobic survival horror game like the one that made this series popular in the first place.

[Related article: my thoughts on Desperate Escape, the second DLC chapter of RE5]

Daniel Feit was born in New York but now lives in Japan where he teaches English to Japanese children and writes for Wired Game|Life. Follow him on Twitter @feitclub or visit his blog, feitclub.com