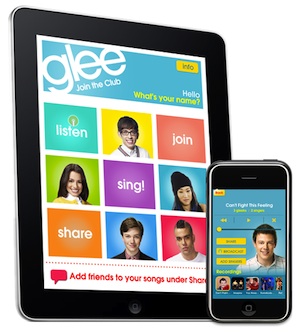 A startup called Smule has released some of the coolest and most popular applications for the iPhone — the hits include Ocarina, which transforms iPhones into a musical instruments, and I am T-Pain, which let users sing while their voice is overlaid with Auto-Tune technology. For its latest app, Smule partnered with the popular Fox TV show Glee, and it’s looking like another big success.

For those of you who don’t watch the show, Glee uses the story of a high school glee club as the format for a modern-day musical filled with lots of recognizable pop songs, so making a musical iPhone app for the show makes a lot of sense.

Cofounder and chief technology officer Ge Wang told me the Glee app is probably the most technically ambitious app Smule has done. Users sing into their iPhone, iPad, or iPod Touch, then the app not only corrects their pitch but also generates harmonized background singing. Users can share and combine their recordings with friends on social networks like Facebook and listen to other recordings from around the world in the app.

The Glee app costs $2.99 (buy it here) and will bring in more money by charging users to download songs beyond the initial free set.

My roommate and I have played with the app a bit, and it doesn’t quite have the instant appeal of I Am T-Pain — there’s a little less novelty, and the sound quality isn’t great. (Obviously, the quality of my singing may be a cause here, but one of Smule’s goals is to reach people who aren’t virtuoso musicians.) I’m told that creating the harmonies really taxes an iPhone 3G’s CPU (which is why you can’t use the app on first-generation iPhones), and the experience is more impressive on the iPad.

Even with the shortcomings, it’s still fun to belt out popular songs. And I’m pretty sure the combination of a big-name partner and cool technology will lead to another hit for Smule. Also, as new songs are featured on the show and presumably added for purchase in the app, Glee should keep money coming in.

Wang told me that the company is still experimenting — both with its technology and its business model. One of the next steps is to see if there’s a way to unify the experiences across all its apps. That might involve a set of social features that work across apps. Wang said he hesitated to call it a social network, because it would be built around music and performance, not personal identity — in fact, anonymity might be a key feature.

“It’s almost an anti-social network,” he said. “I just feel like there’s such an appetite for something like that, where you can connect and participate, and that’s more important than identity.”

Smule has raised a total of $13.7 million in venture funding. When it closed its latest round in 2009, chief executive Jeff Smith told me the Palo Alto, Calif. company was on track to make $3 million in sales for the year.