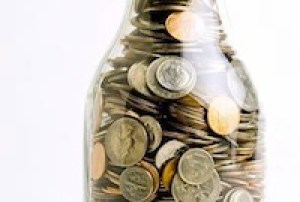 Entrepreneurs hoping for a return to the generous venture environment of a few years ago may have a while to wait, according to the latest MoneyTree report from PricewaterhouseCoopers and the National Venture Capital Association.

During the first three months of this year, venture capital investments fell 9 percent compared to the last quarter of 2009, from $5.2 billion to $4.7 billion. And the numbers of deals declined even more substantially, an 18 percent drop to 681 investments.

Things are better than they were at the beginning of 2009, which was basically right after 2008’s financial meltdown, when venture firms only invested $3.4 billion. But the funding level is still far below where it was pre-crash. For example, if you go back two years to the first quarter of 2008, venture firms invested $7.7 billion in startups.

NVCA President Mark Heesen made a cautious optimistic statement in the report:

Despite a great deal of economic uncertainty in the first quarter, the venture capital industry moved forward with a more active start than it did in 2009, which bodes well for the remainder of the year. With health care reform passed and an improving exit market, we are expecting venture investment to increase moderately throughout the rest of 2010. However, we still anticipate investment levels to mirror that of the mid-1990s as many venture firms will be focused on fundraising this year.

The last MoneyTree report already showed that 2009 was the worst year for venture investing since 1997. And the NVCA and Thomson Reuters already reported that fundraising by venture capital firms was also down this quarter.

As for specific industries, life sciences (which combines biotechnology and medical-device investments) is still getting the most venture money, with $825 million last quarter. Internet investments (which span a number of industries) are down to $807 million, from $941 million last quarter and little more than half the $1.4 billion invested in Q1 2008.

Cleantech, meanwhile, bounced back to $773 million, an 87 percent increase. The sector has more uneven investment numbers, because it tends to involve a few large deals. Early-stage investments are down too, with 299 deals compared to 392 last quarter.

The MoneyTree report is based on data from Thomson Reuters. 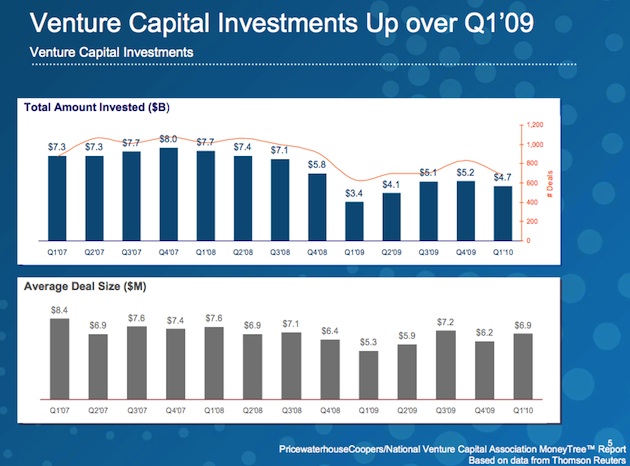 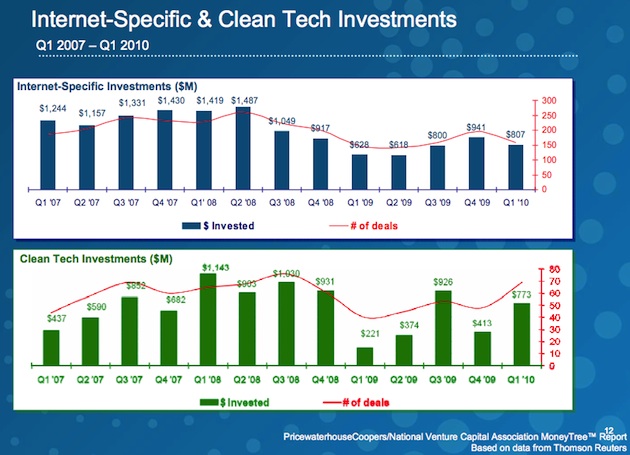 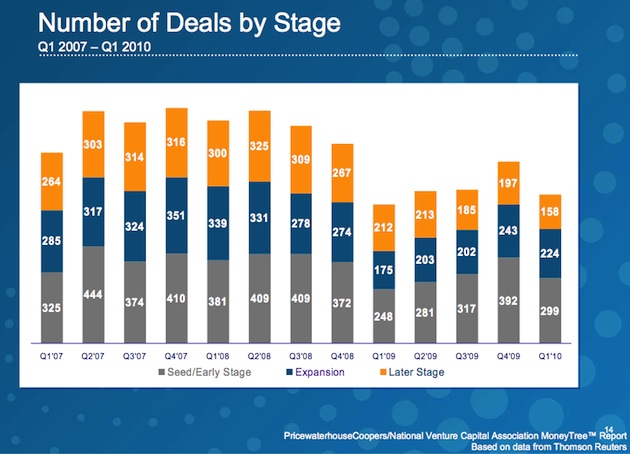