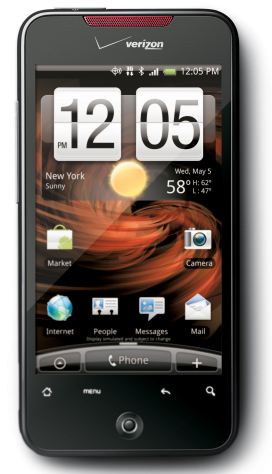 Verizon users can stop waiting in vain for Google to bring its Nexus One smartphone over to the carrier, because there will soon be a new kid on the block that bests the Nexus One in many ways. Verizon announced today another entry in its popular “Droid” series of Android phones, the Droid Incredible by HTC.

The Incredible is a much-needed addition to the Droid family. The Motorola Droid — which was released in November 2009, and is currently at the top-end of the family — appears somewhat dated today when compared to the better hardware specifications of the Nexus One.

The Incredible, on the other hand, features the same basic specifications of the Nexus One. It has a 1 gigahertz SnapDragon processor (nearly twice as fast the Motorola Droid’s 550Mhz processor), and also runs the latest version of the Android operating system, 2.1. The Incredible also has an 8 megapixel camera, compared to the Nexus One’s 5 megapixel shooter, and run’s HTC’s Sense UI — which  gives the Android OS a bit of a facelift.

The faster processor is good news for Android developers who are aiming to create graphics heavy games, or other intensive apps but have been limited by the slower processors on most Android phones. The Incredible will be one of many Android phones coming out this year that features the 1Ghz Snapdragon processor.

It’s also yet another Android phone that will make Verizon users forget the fact that they can’t get an iPhone. With more Android phones of this caliber coming out (see also the HTC Evo 4G) across a variety of carriers, Apple should be worried. Even if the next iPhone is a better device than most other Android phones, Apple still needs to bring it to carriers other than AT&T. Otherwise, Android will eventually overtake its market share due to its more ubiquitous presence.

When Google announced the Nexus One in January on T-Mobile, it mentioned that the phone would hit Verizon sometime this spring. Verizon users have been waiting for more details on the Nexus One’s availability, but Google has been mum on the topic. Meanwhile, it began offering an AT&T 3G-capable version of the phone and announced that Sprint will be getting it at some point as well. With the release of the Incredible, Verizon users finally have an Android option that’s on par with the Nexus One.