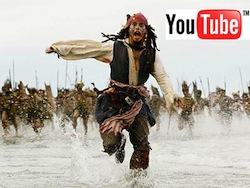 Viacom has released a new set of documents that the media conglomerate says bolsters its copyright lawsuit against Google. In Viacom’s words, it’s hoping to show that when the search giant acquired YouTube in 2006, it made “a deliberate, calculated business decision” to profit from copyright infringement and “to use the threat of copyright infringement to try to coerce rights owners like Viacom into licensing their content on Google’s terms.”

Google responded to VentureBeat’s request for comment by saying the documents have nothing to do with the lawsuit and criticizing Viacom for “trying to litigate this case in the press.”

The main document that Viacom highlights is a “content acquisition strategy update” from 2006, where Google Video team members cast a critical eye on the competition. They write: “YouTube’s business model is completely sustained by pirated content. They are completely at the mercy of companies not responding with [Digital Millennium Copyright Act] requests.”

The presentation includes another statement about YouTube that raises questions about Google’s motivations for buying the site: “The YouTube business model is also not monetizable. They are an AdSense publisher, so we have a good sense of their rate of monetization.”

And a third passage suggests that Google was concerned that YouTube could provoke copyright holders to push for a repeal or modification of the DMCA, a law which largely insulates Internet service providers from copyright claims stemming from the activities of their users: “The DMCA law could be overturned if the media industry engages in sustained lobbying efforts (it was written before the viral video craze took off) and it is risky to build an entire business model on this law.”

To Viacom’s other allegation, about Google planning to coerce content owners, Viacom points to a business strategy document from the same period, where Google said, “We may be able to coax or force access to viral premium content… use threat to get standard deal sign-up.”

Previously, court briefings from Google stated that Viacom was actually interested in acquiring YouTube before Google bought it up.

I’ve embedded the two main documents shared by Viacom below. The quotes are from page 20 in the first document, and page 26 in the second.