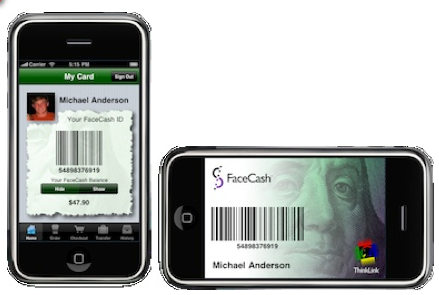 A Silicon Valley company with a noteworthy founder has created a mobile payment system called FaceCash that it hopes will one day displace credit cards.

You might be tempted to write this off as too audacious. But consider this: The founder is Aaron Greenspan, the Harvard graduate who claimed in 2007 that his former schoolmate, Mark Zuckerberg, ripped off his work when Zuckerberg created Facebook. Greenspan settled a trademark lawsuit with Facebook and Zuckerberg filed in 2008 last year.

Greenspan, now 27, exudes not only intelligence, but also a quiet, steely determination: He has been working on his payment technology for about ten years now, since he was managing the accounting technology for his family’s business. Oh, and how would you feel if your college rival went on to build what some people say is a $20 billion company, based on your work? You’d be on a hardcore mission to somewhere, too.

Greenspan demonstrated FaceCash today for VentureBeat, by using it to demonstrate how he could pay for a lunch he had at the Indochine Thai restaurant in Palo Alto, Calif. (See videos below for short demo).

Here’s how it works: You can download the FaceCash application on any leading smartphone — it will be available on iPhone, BlackBerry or Android phones beginning next week. Then you type in your bank account information, Social Security number, and driver’s licence number, and upload your picture. That’s it. You can now use your phone to make pretty much any in-person transaction, whether at a restaurant or at a grocery store — as long as the merchant has signed up for the service. To accept your payment, the merchant simply scans the FaceCash barcode on your phone with a scanner, and your picture will pop up on their computer screen — which helps them avoid fraud. They then approve your payment. Dead easy. And slick. 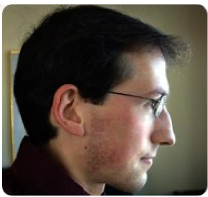 FaceCash is a product of Think Computer, the company that Greenspan started in 1998. The company plans to formally launch FaceCash at the Electronics Payments Association conference this coming weekend.

FaceCash is impressive because its payment system is built from the ground up. If Greenspan pulls it off, he’ll boast complete control over the payment processing system, and thus can offer a cheaper and more efficient payment feature than any other company. Of course, it will take a massive amount of work to get there.

But if he does get it right, there’s huge potential: The mobile payments market is expected to be $510 billion by 2012, according to Edgar, Dunn and Company. Most startups have failed to crack the code, and have fallen back to serve niche segments, such as helping make small payments within mobile games. Even PayPal, a mature advanced mobile company, hasn’t achieved much traction in in-person payments.

For FaceCash, getting merchants to sign up is the first challenge. Merchants have to buy a $30 barcode scanner, and they must also own a basic computer with a browser. If they don’t have one, they can buy it from Greenspan’s company for about $150. That means the merchant is set back about $180.

However, the merchant can make that up quickly, considering that FaceCash charges only a flat 1.5 percent on all transactions. That’s much less than the 3.2 percent that a typical restaurant pays to credit card companies, after various fees, transaction charges and routing taxes are factored in. Take a restaurant that makes about $30,000 per month. FaceCash will help save that restaurant about $450 a month.

That was enough for the Indochine restaurant in Palo Alto to adopt FaceCash. Owner Don Stewart told me he was fed up with credit-card processing fees, and that he was willing to try out FaceCash even if it means he has to install a second payment system in addition to the one he already uses.

Greenspan started testing FaceCash a month ago, and it’s now accepted at five restaurants in Palo Alto. He hopes it will spread from there. The deal he’s offering merchants: If they don’t think FaceCash is worth it, they can return the system after 60 days, and get their $130 back.

But the other challenge is while Greenspan wants FaceCash to replace credit cards, FaceCash really isn’t a credit system. The system is debit-based, meaning it comes from your bank account, and not from a credit card. It means you can’t float money from month to month. This may turn some people off. However, at least you won’t overdraft your bank account, because you pre-approve deposits into your FaceCash account and then just debit it as you make purchases.

So why would you want to use it? Having a waiter or store clerk scan your phone to complete a transaction may sound easy, but so does whipping out your standard credit card. If you don’t mind its debit nature, FaceCash offers a whole bunch of other cool features. It can tell you your exact balance at the point of sale, unlike a standard debit card, and then with that information you can decide whether you rally want to make the the purchase.

While Greenspan concedes FaceCash isn’t a full-fledged credit system, says he’s willing to talk to banks if they want to offer credit on FaceCash.

Another elegant thing is that because it is Internet-based, FaceCash can support the transfer of all sorts of information that the fifty-year-old credit card infrastructure system can’t. When paying, you can specify whether the payment is for personal or business purposes. If it’s for business, the debit can be made from your employer’s account. Your employer can save costs, because they won’t need reimburse you.

You can also get rid of all those other reward or loyalty cards in your wallet, because FaceCash can build barcodes from them on the fly, and insert them in your phone application so that they can be scanned too. Both sides — the merchant and a user — get improved payment data tracking and analysis.

Finally, FaceCash is different from the myriad of other payment services that have popped up in recent years. The company boasts a stand-alone payment system, having built it’s own authentication and payments processing technology from scratch. This frees it from relying on costly intermediaries.

Other mobile phone payment companies, such as Square, Zong, Obopay, and Bling Nation, are all forced to use mobile phones as a bridge, to connect them with credit cards, and sometimes use mobile phone companies for things like bill processing. There, carriers, application developers, banks, merchants and credit card companies are all still fighting over their fair share of the transaction. FaceCash handles the whole thing, from start to finish.

Moreover, FaceCash’s technology also gives it an advantage over buzzy check-in companies such as FourSquare or Gowalla. Users of FaceCash are essentially checking in when they conduct transactions at restaurants or bars, but FaceCash has the additional monetary component. The others can’t hope to build that.

For the record, the word FaceCash has nothing to with Facebook, Greenspan insists. He says FaceCash is a name that reflects the product well. (True, enough, but one wonders if part of the trademark settlement allowed him to use the name on the product.)

At the same time, it’s not entirely a coincidence that he thought up both the Facebook idea as well as this cash idea, Greenspan says. He notes that he took a class on facial recognition during his Freshman year at Harvard.

What’s surprising is that Greenspan hasn’t taken any financing for Think Computer so far. Greenspan moved the company to Palo Alto in the summer of 2006 after he graduated from Harvard. He’s since picked up a small team, including Michael Anderson 19 late last year, who is his sales person, and Allan Bonadio, a veteran former employee of PayPal, who is helping Greenspan navigate the arcane business of ACH transfers, which is what all payments systems are based on. The company also employs a number of freelance engineers and developers.

FaceCash has a tough road ahead of it in the short term, because it needs to sign up lots of customers and merchants before it can be useful to either side. On the flip side, if it devises some smart marketing tactics, and cuts deals with banks so that it can become a credit instrument as well as a debit card, this company has a very nice chance. And we should wish it well, because it offers a more open, useful, and inexpensive technology than the gouging credit card companies.

[If you’re an entrepreneur or executive active in mobile, be sure to join us at MobileBeat 2010, our mobile conference for industry leaders. Sign up here.]