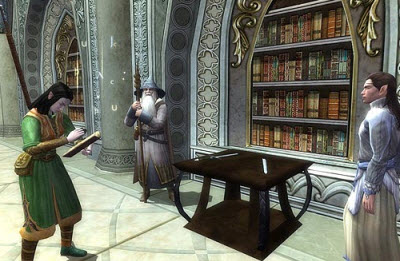 The world of Middle Earth is no longer divided, at least when it comes to video game and film property rights.

Warner Bros. has acquired online game publisher Turbine, the creator of Lord of the Rings Online, a massively multiplayer game where you can parade around as an elf and kill orcs in perpetuity.

Terms of the deal were not disclosed, but the Boston Globe reports that the purchase price was as high as $160 million, based on future earn-outs. That’s not likely to produce much of a return for investors, who put about $88 million into the company since 1994. And some of the acquisition price is going back to Warner, which had previously invested in Turbine.

While the Lord of the Rings Online was a hit, it was a game that garnered an audience of hundreds of thousands of players who paid a monthly subscription fee to participate in a persistent online world. That’s a relatively small audience, considering Peter Jackson’s films and the books by J.R.R. Tolkien epic books have been enjoyed by more than 100 million fans.

Turbine also had some middling games such as Asheron’s Call and Dungeons & Dragons Online, the latter of which started to do better after it was converted to a free-to-play game, monetized with virtual goods purchases. Warner Bros. last year acquired the rights to make single-player games based on the Tolkien franchise from Electronic Arts, and it also owns the distribution rights to the film trilogy, thanks to its 2008 acquisition of New Line Cinema.

“We have been looking to expand access to our online worlds to more players and more markets,” said Turbine president and chief executive Jim Crowley in a statement. “This acquisition is very exciting because it allows us to expand globally while continuing to focus on creating spectacular online games that our loyal fans and players have come to expect.”

Founded in 1994, Massachusetts-based Turbine launched Asheron’s Call for Microsoft in 1999. After Microsoft lost its appetite for the expensive and risky MMOs, Turbine acquired the rights to Asheron’s Call back. Warner Bros., meanwhile, has been expanding with the acquisition of game properties owned by bankrupt publisher Midway Games and the purchase of a majority stake in Rocksteady Studios, publisher of the award-winning Batman: Arkham Asylum game.

Back in 2008, Warner Bros. parent Time Warner and GGV Capital led a $40 million round along with existing investors Highland Capital Partners, Polaris Venture Partners, Tudor Ventures and Columbia Capital. The investment will be used to accelerate Turbine’s growth in online games. And Turbine raised another $6.6 million round in 2009.