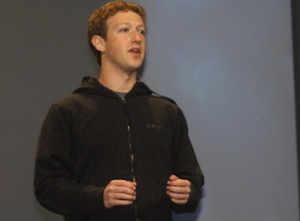 Before making the big announcements today at f8, Facebook’s developer conference in San Francisco, chief executive Mark Zuckerberg shared some numbers on how massive the site and related services have become. Oddly, the big number, 400 million users worldwide, was the same milestone the company mentioned crossing back in February.

But that didn’t stop Zuckerberg from crowing about 400 million users. That means that if you’re building a website, most of your users are probably Facebook users too, Zuckerberg said: “And if they’re not, they probably will be soon.”

He also highlighted how each new Facebook service gets off to faster and faster starts. Facebook Mobile hit the 100 million user mark after about three years, he said, faster than Facebook.com proper but slower than the more recently launched Facebook Connect. Connect integrates the social network with external websites and apps, and it only took 15 months to hit the 100 million user milestone. One example of its significance: 10 of the top 10 iPhone apps use Connect, Zuckerberg said.