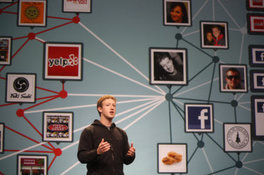 Today Facebook launched a powerful set of features that will compel publishers across the Web to organize their content for sharing and indexing by the social network.

The company released a Graph application programming interface that allows publishers to tag their content by type. For example, if a page is about a restaurant or a band, a developer can label it so Facebook and other apps can easily call up a friend’s favorite bands or restaurants. There seems to be a suggested taxonomy for these terms with space for inputs like latitude, longitude and ISBN numbers for books, for example.

“You can represent any real-world object on the Internet using this open graph protocol,” said Bret Taylor, the company’s director of product. “The web has been connected by hyperlinks, between static pages of content. We think that connections between people is more important.”

Taylor said the company had overhauled its technical infrastructure to accommodate this idea.

A second piece of Facebook’s strategy is a “Like” button for the Web that will easily share content back to the social network. Between Facebook’s launch partners, the company estimates that it will serve 1 billion Facebook “like” buttons by the end of the day on Wednesday. At a session on the new plug-ins later in the day, Facebook indicated that it was deprecating its share buttons in favor of the new “Like” buttons.

That real-time data on people’s preferences will give the company an accurate real-time barometer of influential sites across the Web, beyond the links that Facebook users are already sharing with their friends on its own website.

Facebook will also turn around and offer analytics back to publishers using the API and buttons, providing them with data on how widely distributed their content becomes through the network.