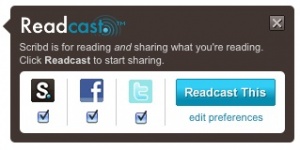 Following Facebook’s announcement this morning of powerful new social tools for websites, book- and document-sharing site Scribd is unveiling features taking advantage of the new capabilities. While that might sound like a minor upgrade, founder and chief executive Trip Adler said the improvements should reshape who uses Scribd and why.

“It’s really recasting the site as a community not just for publishers, but for readers too,” he said.

There was plenty of reading going on before — the San Francisco startup already attracts 50 million unique visitors every month to read its content. But for the most part, the publishers were the only ones who bothered to stick around, create profiles, and interact with one another. Now, by turning each document into a “social object,” Adler wants Scribd to become a site where users can share what they’re reading and how they feel about it.

Specifically, Scribd is adding a feature called Readcast, which will appear as a widget next to Scribd documents. Users select the widget to post a link of whatever they’re reading to their friends on Facebook, Twitter, or Scribd itself. Once someone starts using Readcast, they can adjust the settings so the process is automatic — whenever they visit a new document, Readcast will braodcast that. Scribd is also adding two of the social plugins that Facebook just announced. There’s the “Like” button, which not only shares links on Facebook but makes your likes a permanent part of your profile, and the activity stream, which shows you what your Facebook friends have been doing on the site.

The new features should keep users on Scribd for a longer time, as well as attract traffic from Facebook and Twitter. They also help the publishers selling books through Scribd. Now that Scribd e-books have social features, they can spread virally, where someone buys and likes a book, then their friends see that and check the book out too.

Scribd has raised a total of $12.8 million from investors including Redpoint Ventures and Charles River Ventures.