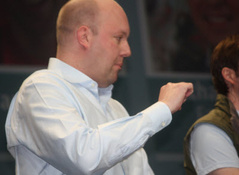 Marc Andreessen, the venture capitalist who also cofounded Netscape and Ning and serves on the board of Facebook, weighed in today on the Twitter platform debate with a position that probably won’t make Twitter developers happy.

The controversy was sparked by Twitter’s purchase of Atebits, the company that created a mobile version of Twitter called Tweetie, with Tweetie becoming the first official Twitter mobile app. Developers who had built their own mobile Twitter apps were concerned, and so were other developers who wondered if they might end up competing with Twitter, too.

Andreessen (pictured above) argued that developers are looking at things backward. They need to swing for the fences, aiming to build companies that will succeed even if Twitter builds something that competes with one of their products. The problem isn’t the fact that Twitter might compete with them, but rather that they’re not ambitious enough — at best, they’re building individual products rather than real companies, and in most cases they’re not even building real products, just features.

“That just doesn’t work regardless of what the platform vendor does,” Andreessen said. “At least not for a venture-backed company.” 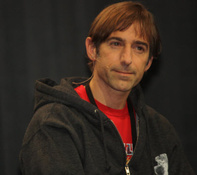 The other speakers on Andreessen’s panel at f8, the Facebook developer conference, didn’t agree. Yelp chief executive chief executive Jeremy Stoppelman said you have to start out small and dependent on someone, then grow. And Zynga chief executive Mark Pincus (pictured right) said the problem may be intrinsic to Twitter, not the developers. Zynga is making lots of money from its Facebook games, but no one has repeated this success on Twitter, he said.

“I just don’t see the Twitter platform achieving scale for anyone but Twitter yet,” Pincus said. He added that the same seems to be true for Apple’s iPhone (a remark that mobile gaming companies like Ngmoco might dispute).

As for Facebook, Pincus said the social network has no obligation to protect Zynga by staying out of gaming. Instead, Facebook is building its platform out of self-interest — by opening the site and its social data to developers, Facebook sees that it can bring more innovative services to users.

Facebook and Zynga have different goals, he added. While Pincus probably doesn’t want to compete with Facebook, if that happened, he said Zynga would compete by “going deeper into our own experience.”