Editor's note: Wow. Did Super Metroid really come out 16 years ago? Jeremy celebrates the anniversary of its 1994 release by discussing how Super Metroid built the foundation for a new genre of game. -Jason

As seen in the latest This Week in Video Game History, Super Metroid came out this week in 1994. Since then, it has garnered praise from every corner of the game industry, often appearing in many "Best of All Time" lists. Future Metroids would go on to receive critical acclamation, but none has seen the love that Super Metroid still receives from fans the world over. But as good as the game is, what is even more impressive is how it defined a genre of game badly in need of a definition. 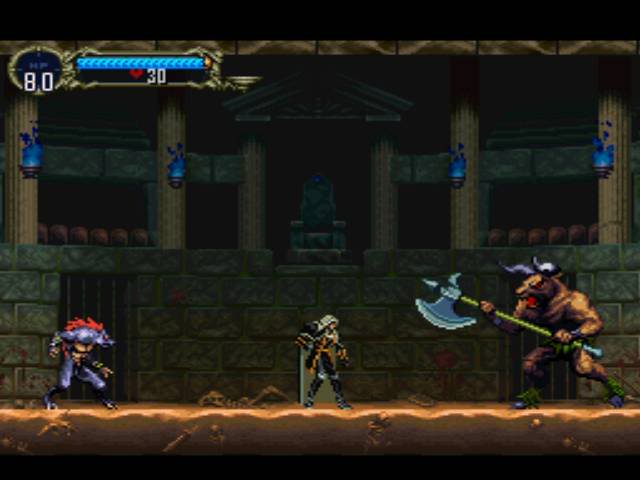 The term “Metroidvania” has worked its way into the gaming lexicon. It's loosely defined as a nonlinear platformer. It is easy to forget that these existed long before Super Metroid, as evidenced in this GameSpite article on Metroidvanias. But the genre didn't really have a lynchpin.

The original Metroid may be the genre's foundation, but it lacks a certain design focus found in Super Metroid. Most Metroidvanias that came before lacked refinement, which makes sense given that many NES games were fairly rough. Super Metroid is just leagues better, with multiple environments, spot-on mechanics, and tons of secrets. The prime example of what previous games tried to do had arrived.

But the nonlinear platformer couldn't solidify into a top genre until another game repeated its success. Enter Castlevania: Symphony of the Night. Clearly inspired by Super Metroid, Symphony of the Night took that template, mixed it with the Castlevania aesthetic and gameplay, and added an RPG-like leveling system. The nonlinear platformer had finally come into its own, boasting two genre-defining masterpieces.

Since then, the Metroid series has seen both iteration (Fusion, Zero Mission) and reinvention (the Prime series). The Castlevania games have stuck the formula laid out by Symphony for its various handheld incarnations. Other, lesser known examples of the nonlinear platformer exist, but these two franchises alone have done the most to make the genre a significant force through both influential quality and sheer quantity. So when Internet game journalism took hold, the term “Metroidvania” became the descriptor of choice.

But how do you define the genre? Being nonlinear can’t be all that's to it. For this, we can look to Super Metroid. The game is nonlinear at a glance, but once you're finished playing it, you realize that the developer really intends for you to take a specific line through the game. You can explore everywhere you can, but if you don't have certain abilities yet, some areas are locked off. The word “locked” is apt, as initially impassible areas act as locked doors that require keys. Think Doom and its cardkeys but built into the environment. The difference is that the abilities that act as keys are a whole lot more interesting that actual keys in that they impart a new gameplay mechanic, which means interesting level design that expands ever outward. The key abilities mark the waypoints by which the “correct” line must pass through.

If this was all there was to it, though, it wouldn’t feel very open. What makes you buy into the nonlinear hype is how it encourages you to explore. Namely, it hides secrets both along the main path and in divergent paths. Some of these secrets are even hidden behind the “environmental doors”, forcing you to use your abilities in new ways. You can’t help but explore every nook and cranny as you progress. This is the basic idea behind a good Metroidvania: The focus of a linear game with the exploration of a nonlinear one.

Of course, Super Metroid harbored an extra secret that most people wouldn’t experience first-hand: You didn’t have to follow the intended line through the game. Known as “sequence-breaking," players found ways to outright skip necessary abilities altogether through sheer prowess. Abilities such as the wall jump and shinespark, which aren't necessary for completing the game in the intended way, could be used skip entire levels, carving out a different line that drastically reduces the time taken through the game. Hence, the speed run community gravitated toward it. Since the game gave you your total time and percentage of items gathered, people used these two criteria for many different types of challenges. Some went purely for time, while others would try to gather all the items and beat the game in the fastest time.

Future games of the Metroid franchise received heavy criticism heavily for hindering this audience. Metroid Fusion provided very few opportunities to sequence break, and reprints of Metroid Prime removed glitches that allowed for faster progress. It seems that even though the Metroid series at large hasn’t kept up with this standard as it progressed, it has been engrained into the series’ DNA. Super Metroid was practically the perfect speed run game, and it inspired a generation to give it a try.

For a good example of this, check out this video of Richard "Smokey" Rodríguez performing a speed run. Notice the sequence breaking he does and his navigation tricks.

Of course, you also have the assorted innovation here and there that made an impact on games at large. Besides the opening, the story is completely nonverbal, communicated instead in pantomime. We see this sensibility today with many games tying gameplay to story in hopes of matching the quality of Super Metroid. And you cannot overstate what the game did for 2D games at large. As the representative of a genre that needed one, however, it succeeds beyond what anyone could have imagined.

Super Metroid can currently be purchased for 800 points on the Wii Virtual Console. Whether you’ve never played it before or loved it back in the day, give it a spin in honor of this anniversary. It will still blow you away.