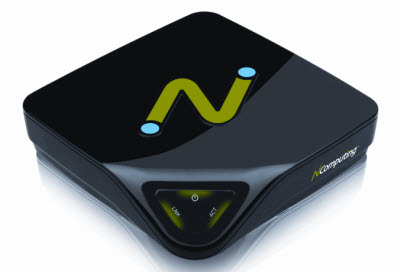 NComputing is unveiling today a computer which costs just $200 but acts like a full-fledged Windows PC for the enterprise.

The L300 — the latest in a series of models — is a little box that connects to a standard Windows computer and uses that PC as a server, allowing a bunch of users to share one computer through NComputing’s distributed computing software. The box, in turn, is connected to a keyboard, mouse and monitor.

Such devices are sometimes called “thin clients” — though in the age of netbooks and cloud computing, that seems like a dated term.

“The aim is to deliver a true PC experience,” he said.

The L300 is the first NComputing product that uses the company’s new Numo chip, which helps reduce the cost of computing dramatically by combining distributed computing with its vSpace virtualization software, which allows a computer to be subdivided so that it can serve different users. The L300 is targeted at the enterprise market, where companies can enable lots of workers to get on the Internet or company network without much expense.

With typical enterprise PCs or thin clients, you have to pay a lot of licensing costs per machine, such as licenses for an embedded operating system or other software, Dukker said. (see examples below) With NComputing, the cost is lower because users don’t need copies of the other kinds of software. But there are some things that the L300 can’t do which a PC can, such as running games. Of course, companies may like that fact since employees can’t goof off at work.

To date, NComputing has more than 20 million daily users for its virtual desktops, which are in use in developing countries. India uses the devices in a number of schools as well as government agencies. Full told, NComputing has more than 600,000 commercial deployments of its thin clients. Dukker argues that virtual computers can save 75 percent in capital costs, 75 percent in operating costs, and 90 percent in energy consumption compared to PCs.

Dukker says the solution works whether you are deploying four computers in a remote office or 4,000 in a corporate headquarters. As a promotion, NComputing is giving away 1,000 devices at this week’s Interop conference in Las Vegas. Volume shipments of the L300 are expected to begin in April.

Here’s some examples of how the NComputing solution has a lower overall cost. For example, a traditional thin client running Windows desktops off of a Citrix server will require the following licenses:

Another example, if you are using a thin client with the VMware View VDI environment:

But with NComputing the costs work out as follows:

–   Embedded OS license:  $0 (there is no embedded OS requiring a license in an NComputing device)

–   NComputing vSpace desktop virtualization software license:  this is included in the price of the NComputing device (which itself costs much less than a traditional thin client)