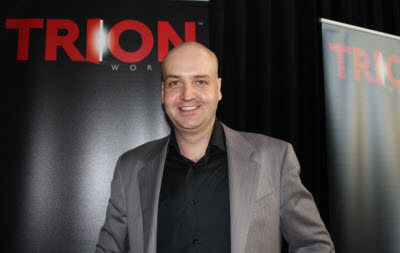 After more than four years of toil, Trion Worlds is raising the curtain today on three major online games that collectively represent one of the most daring bets in video game history.

Many established game companies struggle to make just one massively multiplayer online game at a time. But this startup has raised more than $100 million and hired a team of 250 people across three studios so that it can produce big games in parallel.

The three PC-based titles are Rift: Planes of Telara; End of Nations, real-time military strategy game set in the near future; and an unnamed title that Trion Worlds is jointly producing with NBC’s SyFy Channel. The first two are hitting in 2011, while the third is sometime later than the first two.

“We have raised a significant amount of money to do a most exciting thing,” said Lars Buttler, chief executive of Redwood City, Calif.-based Trion Worlds (formerly called Trion World Network). “We are creating high quality online games and, in effect, are taking the video game industry that makes games for hardcore gamers into the connected era.” 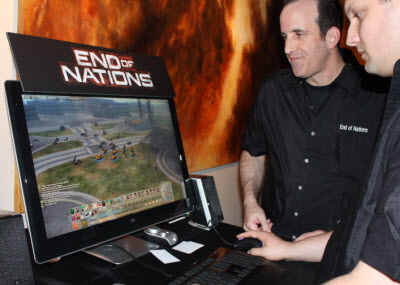 The ambition is to build a better game than World of Warcraft, the long-running fantasy MMO which has 11 million subscribers and generates more than a billion dollars a year in subscription revenue for Activision Blizzard. To do that, Trion Worlds had to spend considerable time designing a new online game platform that focused on a server-based architecture.

In its founding back in January 2006, Trion had similar inspirations as OnLive, which is building an online game service where it can do all the processing in servers and send images back to gamers, with almost no computing done on client machines.

But Trion’s approach to doing server-based games is very different. Buttler says the company designed its game to take advantage of modern servers which can adjust loads as needed. Rather than do the traditional way where one server handles a whole section of a game world, Trion distributed tasks among a number of servers. It can use one server for artificial intelligence, another server for other features and so on. If one section of the world becomes crowded with players, it can simply tap more servers to handle the load.

It also takes advantage of the user’s own computer in a way that OnLive does not. The user downloads software that can render the art work. Hence, the heavy-duty animation is handled by the user’s computer, while the company’s servers handle the chore of running the game. (If it turns out that technologies such as OnLive or Gaikai prove themselves, Trion can adapt so that its servers work with the rendering technology of the other companies; but for now, Trion will tap user computers for rendering).

With this blend of server and client processing, Trion can create what it calls “dynamic worlds.” It can make changes in the parts of the game running in the servers and — presto — the game world can change overnight. Instead of a cheery town, it can turn an environment of the world into ruins. Buttler believes this is the key to creating games worthy of the “next generation” moniker. 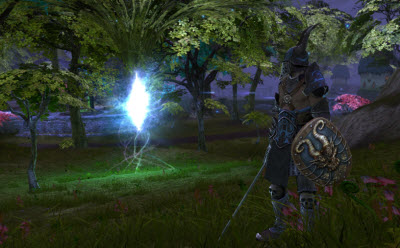 “When Blizzard makes a substantial change, they swap out one big world for another,” Buttler said. “We can make constant small changes to our world. You may see a merchant one day who is gone the next. A town may be alive or in ruins. The goal is to create a world that is truly alive and that you can influence.”

One game that takes advantage of this is Rift: Planes of Telara (formerly called Heroes of Telara when shown last year). In this game, a beautiful Tolkien-like “high fantasy” world is under attack from dark forces from different dimensions. They open up rifts in space and send in monsters to attack the world. The players have to defend against these attacks to stop their world from tearing apart. Rifts can be triggered by the game designers or the players themselves or even occur spontaneously.

The rifts show that the world is dynamic, or always changing, and not static like past worlds, Buttler said. When a rift opens, the terrain, buildings, lighting, sky and everything else changes. Players can fight the demons coming out of the rift single-handed, or in a group. The more help you have, the more loot you can collect from the dead bodies when the rift episode is over. But with more people, you have to dispatch the various enemies more quickly to be able to get the loot. So the rifts are likely to draw huge numbers of players to one location. With rifts, there are no safe zones in the game. If a rift opens near a town, you will have to defend that town or lose the safety and resources in that town.

The graphics and physical simulation of the environment are cool, with a lot of use of lighting and shadows. Similar to Sony’s recent Uncharted 2: Among Thieves game for the PlayStation 3, the draw distances are huge. That is, you can see a long way from one place to another in the game. Typically, online games have short draw distances because it’s hard to animate so much detail and then deliver the images to the user’s screen over the Internet in a timely manner. The look isn’t quite as good as Uncharted 2, but it is very good for an online game. And you can wander for long distances within a level without seeing a loading screen. That keeps users from getting really bored. 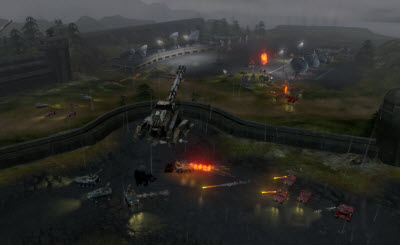 With the End of Nations game, the setting is the near future where a world war is fought with modern armies. The game lets players create their own custom regiments of armor and infanty and then pick any region within the world map to enter the war.

The player can fight alongside allied players in huge maps — with as many as 51 players fighting in a single map. And the Trion folks expect they can handle many more.

No other real-time strategy game has been able to pack that many players into a tactical map with furious combat scenes. You can fight in large areas where there are lots of cool animated details. It can take as long as 20 minutes to move units across a whole map. And players can call in air strikes or missile strikes to assist the ground combat. Those strikes can destroy buildings and they’re quite satisfying to watch.

There will be about 50 tactical maps upon launch. On the strategic level, players can level up to become commanders in charge of other players as they try to change the balance of power in a worldwide metagame that resembles the board game Risk. Thousands of players can play across a world simultaneously. So every time a player logs into the game, they can assess where they are needed most and dive into a tactical map so that they can make a difference in the worldwide battle.

Before you jump into a fight, you can visit your headquarters and check the status of the world war. You can see where the hot spots are in the tactical maps, and view where your friends are playing. You can also customize your tanks, artillery, and other vehicles with colors and decals. You can loot vehicles, do research, and get access to more advanced weapons as you play over time.

The defining feature is that each game will be flexible and adaptable. Trion believes games have to change with the times and keep users interested by introducing events in the storyline of the game that totally change the environment of the game. Trion can do it because it uses the same dynamic game platform with modern server design in each game.

I got a good look at each game, except for the sci-fi game being built with SyFy. For that one, Trion only shared concept art of what the game will look like. Both Rift and End of Nations look beautiful and they are well designed to attract the hardcore fans of each genre. In the fantasy and RTS genres, there is nothing like what Trion showed.

Buttler said that each game is being built with a different business model. The company has three internal game studios in San Diego, Redwood City, and Austin. The Redwood City studio is internally owned and is working on Rift. Trion will publish the game, sell it in a box at retail, and then collect subscription fees for online play. 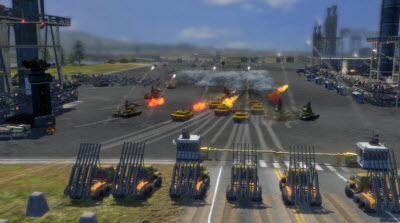 With End of Nations, Trion is working with a game studio it does not own: Petroglyph Games, which has 90 employees at its headquarters in Las Vegas. Headed by Michael Legg, the team has a lot of game veterans who used to work at Westwood Studios, which was acquired by Electronic Arts. When EA, in its infinite wisdom, decided to move the studio to Los Angeles, many on the Las Vegas team quit and started their own studio. By working with this outside company, Trion gets access to a seasoned team and reduces its risk of carrying lots of developers on its own payroll.

And with SyFy, Trion is doing something different. In San Diego, it is co-developing the game with the TV channel, which carries half the costs and pays for publishing fees. The game is tied to the theme of a new SyFy TV show that is in the works. Together, they are creating a new universe of characters, alien races, environments and more. As TV episodes air, the online game’s story line will change and adapt in a similar episodic manner. Players will reportedly be able to influence the outcome of the game, which can influence the TV show.  The team building this game is headed by game veteran Rob Hill and includes a lot of former Sony Online Entertainment veterans. 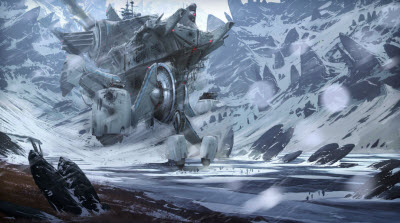 Hill said that look of the SyFy game (pictured right) is not “post apocalyptic,” as has been the case with a lot of recent games from Fallout 3 to the Gears of War series. SyFy wasn’t interested in such scenery, and neither were the artists at Trion. Beyond that, Trion is keeping details quiet.

Buttler said the games are taking a long time to make because that’s what it takes to build large-scale worlds. The maps in each game are big on the tactical level, but lots and lots of those maps are what constitute the entire world of the game.

The development has not been without hardship. Some staffers have left for other companies. That includes Jon Van Caneghem, co-founder of the company, who resigned in April 2009, and Jay Lee, vice president of technology. But Buttler has been able to hold it together, hiring executives such as marketer David Reid and former Sony online game maker Scott Hartsman. But Hill, another Sony game veteran, said that he was drawn to Trion because of the huge opportunity. 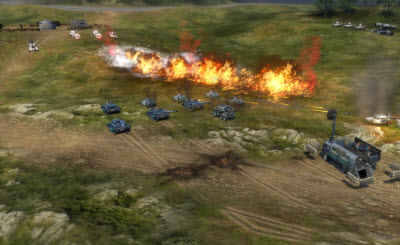 “You don’t get a chance to do something like this everyday,” he said.

“We’ve done new studios, new architectures, and new games,” Buttler said. “I’m not apologetic at all about what that costs. I would argue we have been very disciplined financially.”