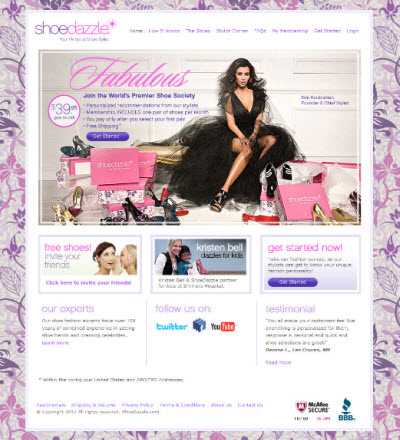 Watch out, Zappos. ShoeDazzle has a deal for the shoe lovers of the world. Today, the profitable online shoe sales company is announcing that it has raised $13 million in funding as it expands into new categories.

With celebrity Kim Kardashian as co-founder and spokesmodel, the company has seen its sales rocket in the past year. Every month it recommends pairs of shoes for its (mostly) female customers to buy.

The shopper buys one pair and at that point starts paying $39.95 a month. Each month, ShoeDazzle recommends five shoes for the buyer. The customer can pick one pair, or turn them all down and elect not to pay anything for that month. Shipping is free.

The customers can buy the latest current styles from celebrity designers, including Kardashian herself. The online business captures the “essence of shopping on Rodeo Drive, while remaining fun, affordable and effortless,” Kardashian said.

This built-in customer loyalty is a strength; not many companies have a way to get customers coming back every month. The company treats its customers like celebrities, stealing a page out of the playbook of Zappos, the online shoe sales company bought by Amazon.com for $807 million.

The funding was led by new investor Lightspeed Venture Partners and included existing investor Polaris Venture Partners. The company will use the money to launch related products. So you can probably expect an expansion into other fashion categories beyond shoes.

ShoeDazzel was started by chief executive Brian Lee, who previously founded LegalZoom. Jeremy Liew, a partner at Lightspeed, said in an interview that the deal was the first one he’d led in 18 months.

“This business is growing by word of mouth into millions in monthly revenues within a year,” Liew said. “The first generation of online commerce was for people who knew what they wanted and were hunting for the best price. This generation lets shoppers gather a group of things, only some of which they will buy.”

Liew said some of the new funds will go into improving the recommendation technology that suggests the shoes for shoppers. To date, the company has raised $20 million.