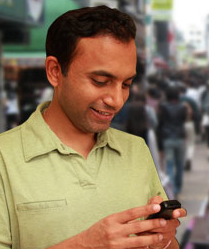 The New York-based startup focuses primarily on Latin America where it enables low- and middle-income workers to find jobs by creating resumes at Internet cafes and web kiosks. What’s interesting about Assured Labor’s model is that it has the power to make job markets in emerging economies vastly more efficient.

About two-thirds of the people in the markets Assured Labor targets lack home Internet connections, and many job seekers try to find work via word of mouth. Through the company’s Latin American property EmpleoListo, a job seeker can write up their work experience and skills and post it to the site. Employers search for hires by location, education, pay range and skill set; they pay to reach out to prospective hires through text messages.

Founder David Reich, who developed the idea for the company at MIT’s Media Lab, said 60 to 80 percent of job seekers usually respond in less than a day.

After a pilot in Nicaragua over the past few months, the company has attracted 14,000 job seekers and is starting to run tests in other Latin American countries. Assured Labor earns revenue by charging recruiters who want to reach out to applicants.