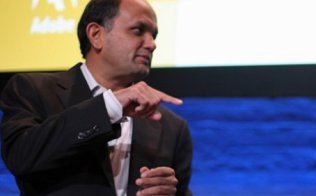 “Adobe should focus more on creating great HTML5 tools for the future,” Jobs concluded, “and less on criticizing Apple for leaving the past behind.”

Reporters at the Wall Street Journal lined up an interview with Adobe CEO Shantanu Narayen to respond to Jobs’ claims.

“I’ve met him on a number of occasions,” Narayen said. But he disagreed with most of what Jobs wrote.

“We have different views of the world,” he said. “Our view of the world is multiplatform.”

Apple technology pundit John Gruber wrote a smart-aleck response to Narayen’s claims: “Who are we supposed to believe, Shantanu Narayen or our own lying Activity Monitors?”