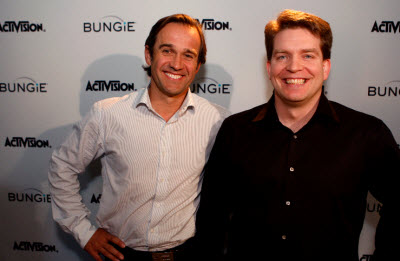 In a major shift of alliances for a blockbuster game maker, Bungie has announced a publishing alliance with Activision Blizzard.

Activision Blizzard, the world’s biggest independent game publisher, will be the exclusive publisher of Bungie’s next major game. To date, Microsoft has been the publisher of Bungie’s Halo games. The last of those, Halo: Reach, is scheduled for release on the Xbox 360 this fall. But after that, Activision Blizzard, through its Activision Publishing division,will take over and publish Bungie’s new game (and presumably sequels) across multiple platforms for the next 10 years.

For Microsoft, it’s a blow as it loses its exclusivity on its most treasured game developer. Bungie’s games have sold more than 25 million units worldwide and generated $1.5 billion in revenues. But it’s not unexpected. Microsoft acquired Kirkland, Wash.-based Bungie for $30 million or so in 2000 as it was preparing the launch of the original Xbox. But, after the Halo games became gigantic sellers, Bungie wanted to become independent and spun out from the parent company in 2007.

Bungie has been working on a new intellectual property for a while, and Activision will publish that. The Halo game property will stay with Microsoft, which could use other game makers to build Halo games. Microsoft has started its own internal Halo studio, 343 Industries. Precise terms of the deal were not disclosed, but Activision likely paid a blockbuster-size price for this deal. Bungie will remain an independent company and own its own intellectual property.

Brian Jarrard, community manager for Bungie, said today that the team, led by Bungie co-founder Jason Jones, has been working on a new game universe since 2007. After the 180-person studio finishes Halo: Reach, it will by and large entirely roll over toward making the new game. Jarrard said that new effort is likely to be all-consuming and that Bungie is not likely to take on a separate game universe anytime soon.

“It’s ambitious for us,” Jarrard said. “For now, the only way to pull that off is to have the full might of our studio focused on our original goal.”

In light of recent events at Infinity Ward, maker of the Modern Warfare series, this deal is an important one for Activision Blizzard. Infinity Ward has suffered a meltdown as dozens of developers have quit after Activision Blizzard fired the game studio’s co-founders, who alleged that the parent company denied them royalties and wanted them to rush new Modern Warfare games out. Activision fired back, saying the co-founders were planning to defect and take their employees with them. Now the parties are locked in litigation, and the co-founders, Jason West and Vince Zampella, have started a new game studio, Respawn Entertainment, allied with rival publisher Electronic Arts. Activision’s handling of this affair might have scared off talented developers.

This deal was signed in March and the companies could have waited until later to sign it. But Activision desperately needed some good news to show its investors after letting go of the Modern Warfare developers, who’d generated $3 billion in revenues for the parent company since 2003. The question is whether Activision had to pay a lot for that. It’s likely that Activision will pay Bungie hundreds of millions of dollars in development fees over the 10-year deal and will pay game sales royalties on top of that. By contrast, with Infinity Ward, Activision kept 100 percent of the margin and reinvested it in its own game studio. So even if the Bungie game is a blockbuster, it will be a challenge to make it more lucrative than the Modern Warfare games.

The Bungie deal is as big as they get. Game fans are going to benefit, since Bungie games will now likely be available across a bunch of platforms. The studio will have access to Activision’s huge publishing resources. Majority-owned by Vivendi Universal, Activision Blizzard has published a huge range of hits from Guitar Hero to World of Warcraft.

“We chose to partner with Activision on our next IP because of their global reach, multi-platform experience and marketing expertise,” said Harold Ryan, president of Bungie, (pictured top, right). “From working together over the past nine months on this agreement, it is clear that Activision supports our commitment to giving our fans the best possible gaming experiences.”

“Bungie is one of the premier studios in our industry and we are extremely pleased to have the opportunity to work with their talented team over the next decade,” stated Thomas Tippl (pictured top, left), Chief Operating Officer of Activision Blizzard. “Bungie has developed some of the most compelling and successful games, multiplayer experiences and thriving fan communities, and this alliance underscores our long-standing commitment to foster the industry’s best creative talent. Our unprecedented partnership with Bungie will enable us to broaden our pipeline of exciting new games as we continue to strengthen our industry position and pursue long-term growth opportunities.”

Details on the next game haven’t been released. But one thing is clear. For Bungie, it’s goodbye Halo.