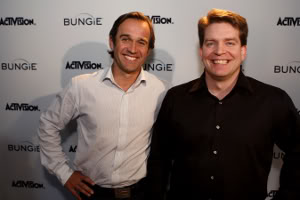 Activision has entered into a 10-year exclusive partnership with Halo developer Bungie. In addition to laying out the publishing terms of a "big action game" on multiple platforms, the deal stipulates that Bungie will continue to fully own their intellectual property. “We chose to partner with Activision on our next IP because of their global reach, multi-platform experience and marketing expertise,” said Harold Ryan, president of Bungie. “From working together over the past nine months on this agreement, it is clear that Activision supports our commitment to giving our fans the best possible gaming experiences.” I wonder where he's been during the past few weeks?

Sony is being sued by a California PS3 owner over its decision to drop secondary operating system support. A firmware update released on April 1 removed the ability to install other operating systems — such as Linux — onto the console. The suit contends that "Sony's decision to force users to disable the Other OS function was based on its own interest and was made at the expense of its customers," blaming Sony's continual battle with piracy and hacking as the impetus of the change. Anthony Ventura, the lawsuit's plaintiff, is asking for over $5 million in compensation. Wait — A. Ventura? Alrighty then! [Kotaku]

Speaking with GamePro, God of War 3 director Stig Asmussen shared the different ideas previous directors had for the story's finale. Series creator David Jaffe envisioned Kratos' total destruction of Greek mythology (with Norse mythology "right around the corner"), whereas God of War 2 director Cory Barlog wanted Kratos to assume a Death-like role, complete with two whirling sickles as blades. And this is why David Jaffe is awesome: Apart from his typically vocal rants, his ideas are completely over the top.

Young kids and early teenagers are increasingly picking up handheld game systems, according to a report by the NPD Group. Sixty-five percent of households that contain a child aged from four to 14 years old own a video game console, of which 44 percent are portable — an eight percent increase from a previous study in 2005. Only HDTVs and cell phones surpass consoles for intended purchases, with a large chunk (37 percent) of a recent hardware sales figure caused by purchases for kids. Wallet-draining TVs? Cell phones with iron-clad contracts? What happened to buying a simple toy firetruck? [IndustryGamers]