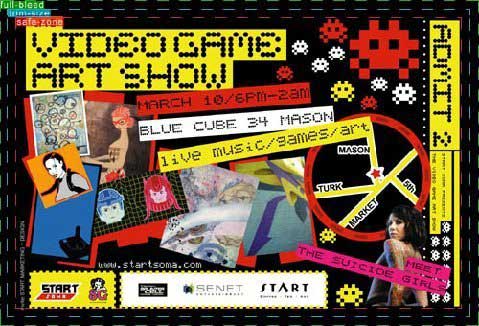 My perception of time is getting completely screwed up by all the RSS feed items I read. The Roger Ebert debate seems almost stone-age at this point, such that the guest blog entry on Kotaku today by Grant Tavinor, author of "The Art of Videogames," seems extremely late and not as relevant as if he'd chimed in earlier.

In his post, Grant criticizes the vague definitions of art in arguments proffered by we armchair enthusiasts, but then admits that even the experts don't know what the word means:

…Needless to say, there is not wholesale agreement on the correct definition of art…"

The best thing about art is that we "armchair art critics" really know as much about art, in terms of the core question of what it is, precisely, as someone who spends their whole lives studying it in the academy. Those people find pleasure in engaging in the fool's errand to define "art," and more power to them, but this conversation has been going on for THOUSANDS of years. If there was an answer, surely the collective imagination and intellect of the human race would have come up with it by now?

Anything that is studied under "philosophy" HAS no answer. If it did, it would fall under some other discipline. Even under the cluster definition that Grant offers, there are meaningful weaknesses.

The art deco in Bioshock is borrowed, not invented, so is it appropriate to give Bioshock artistic validity for making the choice to take someone else's style?

I feel no emotion from Bioshock. I don't know many who do.

Calling Bioshock "intellectually challenging" is a stretch. Maybe for someone who doesn't read very much, but Ayn Rand is high school fare, and her status as a "philospher" is something many real philosophers take serious issue with. Her worldview is simplistic compared to the heavy fare of men like Nietzsche, Rousseau, Plato, Sartre, etc.

What is the "artistic impact" of the opening sequence? It's immersive, anyone should grant that…but "immersion" isn't listed in either of those set of artistic criteria.

The reason why I cling to a definition of "art" that revolves around intellectual or emotional resonance is because this is a reaction we can witness in those who view and discuss art. Video games simply *do not do this yet*. Shadow of the Colossus is thrown around as an example of a video game which is art, but no one has yet to explain to me what the resonant quality of this work is. What deeper questions does it raise which eventually cease to have anything to do with the game itself? That's what happens when something "resonates." It spirals away from the original source and turns into something else.

When it happens, it's not a debate. No one had to argue about whether the Mona Lisa struck something in them, *it just did.* The definition of "art" is colloquial, not academic. It is a status which is granted upon an object by critical mass of consensual opinion.

Video games are waiting for an object produced in the medium which leaves no doubt as to whether it is art or not. That's about as circular and vague as the definitions of art, itself, but it's also true. The day will come when someone produces a video game that is such a work of unmitigated genius that it literally changes lives, and breaks into the art world without trying, and without any ability to deny the validity of the discussion.

That will be when video games become art, but not before.