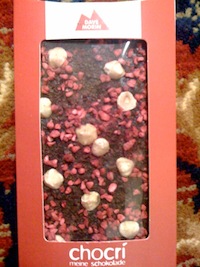 Retailers have been using the Web as a way to let shoppers customize their products for a while now, most notably in the jewelry industry with companies like Blue Nile. A German startup called Chocri is taking a similar approach in a less obvious market — chocolate. And it’s looking to expand into the United States.

The interface is pretty straightforward. Users just go to createmychocolate.com, then choose from menus of chocolate types, fruits, nuts, and so on. Everything you add contributes to the price — for example I created a basic chocolate bar with almonds and gummy bears, and the price came out to $11, plus $6 for shipping. Once you’re done, Chocri builds the bar in its facility in Germany, then mails it to you. So you get a chocolate bar that hits your exact sweet spot — so to speak — and it’s probably fresher than what you’d buy in the supermarket.

Chocri launched in September 2008 and first launched for US consumers back in January. Carmen Magar, who’s leading the company’s US efforts, acknowledged that the product hasn’t taken off as quickly here as it did in Germany. That’s because the customization market as a whole isn’t as far along here, she said.

Magar’s thinking of creative ways to change that. For one thing, she was at the South by Southwest conference last month in Austin, where she gave out promotional chocolate bars designed by tech celebrities like entrepreneur and former Facebook platform evangelist Dave Morin and social media expert Gary Vaynerchuk of Wine Library TV. (The Dave Morin bar is pictured above.) That’s definitely something I heard other conference attendees talking about. And to really ramp up its visibility, Magar said Chocri should partner with other other custom retailers, such as design-your-own-shirt site Blank Label.

Meanwhile, the company is still improving the product, mainly by offering even more customization possibilities. This week it began offering the ability to combine different layers of chocolate, starting with white and dark chocolate.

Chocri is self-funded, and Magar said there are no plans to raise venture capital.