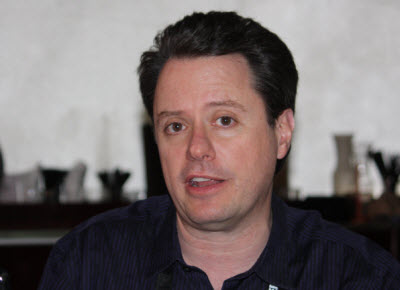 The game is unique in that you can take the code for the game and embed it as a widget in any web site. It’s a way for InstantAction to redistribute games so they can be played widely across the web. It becomes a lot easier for consumers to try out, purchase and download premium versions of games. And for web site owners, it’s a way to keep users engaged on a web page so that they stay longer.

Las Vegas-based Instant Action is using the Monkey Island game, which originally debuted on the PC in 1990, to debut its direct-to-consumer online game distribution service. Louis Castle, chief executive of InstantAction, said in an interview that the service is all about reducing the friction that stops people from trying out new games.

“The power of the platform is that you can embed an online game in places where people are most likely to play it,” Castle said.

In contrast to Flash-based games or lightweight Facebook games, the Monkey Island game is an example of a deeper game with decent graphics. Other games coming in the future will show that even games with high-quality graphics can be instantly, or at least very quickly, playable from a web site.

The service taps new technologies for progressive downloading, which lets someone start playing a game before it finishing downloading by dispatching all of the files needed to start a game first. It also taps in-browser and thin-client technologies to deliver a fast-play experience — or instant gratification for users. The service essentially lets users instantly play games that might otherwise take hours to download.

The embed code function makes it as easy to embed a video game in a web site as embedding a YouTube video or a photo. That should help game publishers expand their reach because the games will be embedded in places where sharing, discovery and recommendations are easy. For instance, a game review web site could embed a game in a blog post, as we have done with the embed code below.

“It was only a matter of time before the Internet disrupted the extremely limited distribution channels available to game creators, enabling direct-to-consumer access and more control over sales performance and profits,” said Evan S. Wilson, senior research analyst of Pacific Crest Securities. “The InstantAction platform virtually obliterates the obstacles to game distribution by making it possible for anyone to embed any video game anywhere on the web, just like embedding a video.”

The InstantAction platform lets players to play Secret of Monkey Island: Special Edition on Facebook, most websites that allow users to embed objects via iframes;  and blog sites such as personal domain pages on WordPress.org, TypePad, Movable Type, Tumblr and Google’s Blogger. The InstantAction embed code works on any web page that lets you edit the HTML code.

There are lots of rivals out there such OnLive, which will debut its online game service in June. But OnLive is relying upon extremely efficient delivery of game code from a server data center to a player’s computer or TV. Castle said that his technology could accommodate such server-based delivery of games in the long run, but in the meantime he thinks there are plenty of interim technologies such as the one his company is using now for instant game playing.

InstantAction also has a partnership with Gaikai, which has a game-streaming service that lets games be played instantly while a download is happening in the background. While InstantAction is starting with a relatively simple game, Castle said that more complex games can also be distributed on its platform. The company has more than 100 employees, many of whom are helping game publishers prepare games for launch on the InstantAction platform.

The Secret of Monkey Island:SE powered by InstantAction