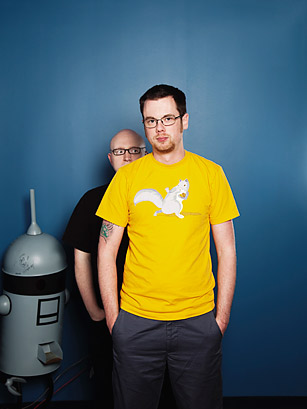 Every year, Time Magazine chooses the most influential people in the world and includes them in a list that is conveniently entitled Time 100.

The decade-old list has boasted luminaries like Oprah Winfrey, Steve Jobs, and Hu Jintao in previous years. With such unquestionably influential people gracing Time's collection, it comes as a surprise that Jerry Holkins and Mike Krahulik, two modest gamers from Spokane, Washington, appeared among them. Then again, the two are responsible for Penny Arcade, one of the most important social icons within the video game industry.

Although you can track their fame back to immature Quake-inspired jokes made in '97, Krahulik and Holkins earned their place in the Time 100 after establishing the Penny Arcade Expo, a famous convention, and Child's Play, a charity for sick children.

As the only figures related to the gaming industry on the list, Jerry Holkins and Mike Krahulik are ostensibly our representatives to Time's worldwide readership — whether you like it or not [via Time Online].