AppDynamics, a company offering tools for monitoring the performance of applications running on Web-based cloud and virtualized infrastructure, just announced that it has raised $11 million in a second round of funding.

The company’s founder and chief executive is Jyoti Bansai who, previously served as lead architect at Wily Technology, another company in the application management market. AppDynamics seems to be emphasizing the idea that it gives IT managers an easy-to-set-up window into how an application is doing, with a product that’s designed for cloud apps. Here’s how InfoWorld described it:

AppDynamics 2.0 monitors a distributed Java or .Net Web application with only a couple percent overhead, revealing real-time high-level charts and diagrams, while allowing admins to dig down to the method, class, or database query level when ascertaining the root cause of performance problems. AppDynamics automatically determines the application’s architecture, enabling it to follow business transactions throughout.

AppDynamics can also automatically provision, configure, and tear down Amazon EC2 instances based on predefined load rules. In other words, it can not only monitor performance and see that the load is high enough to slow down the application, it can do something about it. 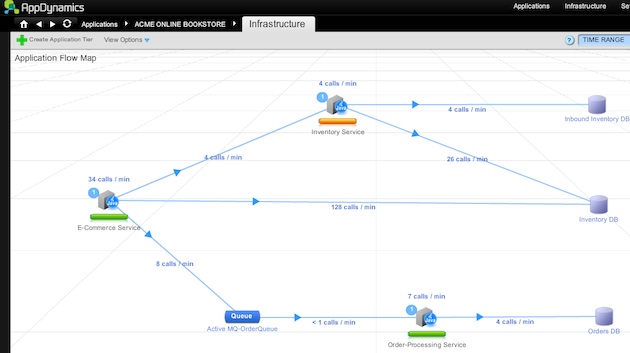